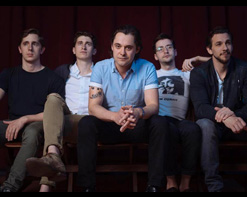 “Whoever said rock and roll was dead must have just given up”. With a name taken from a Ryan Adams song, it’s no surprise that Cold Roses fully embrace a rock-meets-country-meets-blues vibe, for a take on Americana that’s incredibly unique and speaks directly to the current musical zeitgeist. Lead vocalist and guitarist Rob Clancy spent years playing guitar in bands around Philadelphia, but eventually it came time to start something new, and play the music he’d been envisioning writing for so long. Brandon Porter joined on bass; then Alex Ayala joined on keys and R.M. Webb on drums; the lineup was finally completed with Rick Rein on trumpet and Tom Petraccaro on saxophone. Cold Roses have perfected their live show with performances all around Philadelphia, and in 2014 released their debut album No Silence in the City.

WXPN’s The Key says they sound “they’re straight out of a Texas roadhouse with their old-style country rock/blues combo”, and The Swollen Fox calls No Silence in the City “one hell of a rock ‘n’ roll album”, praising their live show as well (“When these songs are experienced live, it’s difficult to resist the dance floor”).

“Staying Alive Ain’t Easy”, set to be released on May 26, comes as the first single off of Cold Roses sophomore LP, Escape to Anywhere (due out this spring via Recorded Records). Directed by Luke Paglia, the “Staying Alive Ain’t Easy” music video switches between footage of the band recording in the studio and performing live. We also get bits and pieces of daily life around Philadelphia. The result is a clip that makes the viewer feel like they know what a day in the life of Cold Roses is like.

“Staying Alive Ain’t Easy”, and neither is making a music video as engaing as this one… we’re thrilled to be working with Cold Roses on the promotion of this clip! Please let us know what we can do to get the “Staying Alive Ain’t Easy” music video into your cherished programming! For more information please contact Andy Gesner and the HIP Video Promo team at (732)-613-1779 or email us at info@HIPVideoPromo.com.