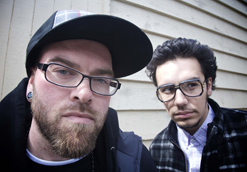 Greetings cherished programmers! It’s Andy Gesner and the staff from HIP Video Promo, here to share with you a clip from a conscious hip-hop act that has been opening eyes and ears all over the nation. DJ Sabzi and emcee RA Scion – better known as Common Market – have established themselves as leading lights of the booming Seattle alt-rap scene. But don’t look for them in the Pacific Northwest this week: instead, they’ve been rhyming, and speaking truth to power, at the Democratic National Convention in Denver. They’ve already performed with the like-minded Dead Prez at an End The Occupation rally and shared the stage with David Rovics and the Blue Scholars at t he Tent State Music Festival. A prolific writer, RA Scion has been keeping an online journal (published in Urb Magazine) of his experiences and impressions of Denver. Like everything else Scion writes, the Urb weblog is passionate, opinionated, deeply felt, and compelling; it’ll surely provide fodder for the emcee’s erudite lyrics.

And after the party’s over in Denver, he and Sabzi will be returning to Seattle for the real main event – the official release of their debut full-length. On September 5, Common Market will be featured on MySpace; a week later, they’ll take the stage at the ultra-hip Neumos to celebrate the launch of Tobacco Road. The show will certainly sell out – and not just because indie faves The Emergency and the Tallboys Old Time String Band are also on the bill. No, Common Market have a reputation for being a ferocious live hip-hop act, one equally comfortable playing at a basement party or on a gigantic festival arena (they’ve done both). They’ve already proved their merits and mass appeal while sharing stages with For The Coup, Ghostface, and Zion I; the great KRS-ONE is a fan of the duo, and invited them to join his Temple of Hip-Hop tour.

Their recordings are every bit as exciting as their performances. At turns politically-conscious and darkly-humorous, poetic and philosophical, rustic and urbane, Tobacco Road is a statement of faith from hip-hop true believers. Lead single “Trouble Is” tells the story of Scion’s engagement with the Seattle rap scene and rise to notoriety in rich, allusive language – it’s a fable spun straight from the emcee’s heart. Over a crisp snare and a stinging church-organ riff, Scion spits rapid-fire rhymes about humility, fans and haters, Common Market’s celebrated appearance at the Sasquatch Festival, and the struggle to maintain communitarian ethics in a dog-eat-dog music scene. But don’t just take our word for it: direct your web browsers to Common Market’s much-visited website, and read Scion’s line-by-line explanation of the lyric. It’s just another demonstration of Common Market’s uncommon generosity: here’s the rare group willing to go to any length to communicate clearly with its growing fan base

Video director Zia Mohajerjasbi is a Northwestern artist too – he’s worked with Common Market before, and he’s also shot clips for the similarly-engaged Blue Scholars. But we’re sure he’d be the first to agree that the beautifully-shot video for “Trouble Is” is the best thing he’s ever done. There’s an edited version of the clip appended to the reel we’re sending you, but you’ll definitely want to watch the complete version. Much like the song, it’s a parable – and like all good parables, it begins in a church. As the preacher delivers the sermon about the value of hard work, Scion drops a roll of fifty dollar bills into the collection plate and leaves the building. He’s followed by a group of young parishioners, who corner him, surround him, and rap his own words back to him in his own voice. There’s a dramatic baptism scene, a full gospel choir, and a sermon to remember: and after being “born again”, the bearded and impressive-looking emcee makes sure to take back his own contribution

A huge thanks go out to Bill Dern and Kevin Calabro at Hyena Records and David Meinert at Fuzed Music, as we are stoked to be a part of their promotional team, fighting the good fight on behalf of Common Market and the “Trouble Is” video. We possess a healthy supply of Common Market’s new album Tobacco Road, so please do not hesitate to get in touch for your on-air giveaway needs! If you need more info, call Andy Gesner at 732-613-1779 or e-mail us at info@HIPVideoPromo.com.