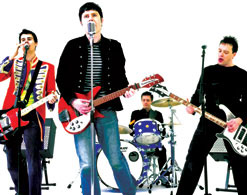 Hello to all. It’s Andy Gesner and the staff at HIP Video Promo bringing you another dynamic clip from our friends at Rainbow Quartz! Here at HIP Video Promo, we see scores of indie clips each year. Most of these videos are by young bands trying to distinguish their music from that of their peers, and inscribe their words and melodies on the minds and memories on audience members. And it’s occurred to us many times: why don’t these groups ever superimpose their lyrics over their clips? There’s an obvious answer, of course – many directors believe text shatters the style of an artfully directed video. We don’t agree, and we’re pleased to see that The Contrast are on our side. The British quartet’s latest clip is a terrific example of how powerful printed words can be in a music video – a vibrant illustration of lyrics as a living transcription of an emotional state.

But we wouldn’t expect anything less from The Contrast. The power pop combo from a particularly unpretentious burg in the English Midlands (working-class Peterborough, to be exact) has always written quietly thoughtful songs that recall the tuneful experimentation of mid-Eighties American college radio. Singer and guitarist David Reid wields his Rickenbacker with the skill and jangle of Reckoning-era Peter Buck, and addresses the microphone with the dark fire of Pat DiNizio of the Smithereens. The band’s three part harmonies are tightly fabricated, and support Reid’s irresistible melodies. It’s easy to see why The Contrast are Little Steven Van Zandt’s favorite band: they epitomize the classic-pop virtues he believes in, and he’s said so on the air during his Underground Garage radio show.

Forget To Tell The Time, the band’s fourth full-length, has been hailed as its best. It’s certainly the most streamlined and direct Contrast album yet – fourteen shots of succinct, cutting, barbed pop delivered straight to the gut with tremendous feeling and energy. “Ink” is a classic slice of Rickenbacker-rock: a sharply-constructed and mildly psychedelic latter-day Byrds number that builds to a singalong chorus. It’s a staple of the band’s surprisingly frenetic live show, and it had the hipsters dancing in their cool shoes at SXSW.

The backdrop might be swirling and slightly trippy, but the video for “Ink” foregrounds the blood-and-bones content of the song – the lyrics are scrawled longhand, in cursive, through the middle of the frames. As the group plays, a stream of phrases races across the screen from left to right, as if they’d been written by a frantic annotator. From time to time, words are pulled out of the procession, replicated in thick, bold, colored letters, and flashed on the screen for emphasis. The members of The Contrast stand behind the cavalcade of text: it’s unclear whether they’re pushing the phrases forward, or if the words are animating their activity. Washed out and white-faced, Reid and his three compatriots appear to be literal manifestations of the mythic poet who stands blanched, pale and unbowed after a restless outpouring of language.

We once again have the good fortune to work with all of the fine folks at Rainbow Quartz, and we know we can always count on them to deliver a brilliant product. We will have plenty of copies of Forget To Tell The Time available for on-air giveaways. If you need more info, call Andy Gesner at 732-613-1779 or e-mail us at info@HIPVideoPromo.com. You can also visit, or http://www.TheContrast.net to find out more about The Contrast.