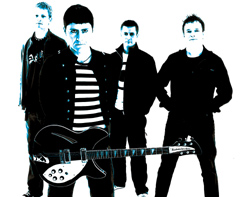 Greetings cherished programmers! it’s Andy Gesner and the staff from HIP Video Promo bringing you a video worthy of your undivided attention. The Rainbow Quartz label is a mark of quality: every band on the roster of the respected NYC-based imprint has distinguished itself through musicianship, performance, arrangement, and attention to detail. Rainbow Quartz is unafraid to put their muscle behind unorthodox acts, and this is one label that’ll do whatever it can to support the vision of a great songwriter. Case in point – David Reid of The Contrast. His band has now put out five albums through Rainbow Quartz, and each subsequent release has been more sophisticated and crisply-written than the last. Along the way, The Contrast has built a devoted international audience, and won the admiration of discriminating rock fans on both sides of the Atlantic. Some Contrast fanatics are even in positions of influence – Little Stevie van Zandt of the Underground Garage was so impressed by 2005’s Forget To Tell The Time that he called The Contrast “one of the best bands on the planet”. A year earlier, he’d extended an invitation to the quartet to play his Underground Garage Festival. Reid and the band accepted – and left Randall’s Island smoking.

What makes this power pop group so exceptional, and its music so much more rewarding than that of comparable bands? Perhaps it’s because of the dark undercurrents that run through all their music, and the seriousness of the subject matter that Reid takes on. Underground Ghosts, their latest, turns up the volume and the distortion to unprecedented levels for a bracing trip through a troubled psyche. “This is straight-ahead, full-bore rock,” reports Erik Hage of the All-Music Guide, “fraught with an almost grim seriousness, from the fatalistic groove of “Pocketful of Fear” to the melodic pummel and psychedelic guitar break of “Believe”. But best of all is the swirling “My Peace Of Mind” – both a quintessential Contrast track, and the culmination of what they’ve been working toward for the past eight years. This is power pop, for sure, but it’s thoughtful, reflective, and maybe even a little bit tormented. Without sacrificing an ounce of energy or urgency, David Reid and The Contrast have matured.

Every Contrast recording strongly indicates how powerful a force this quartet is in concert, and “My Peace Of Mind” is no exception. A performance clip is really the only proper match for a song that sounds so live, and The Contrast have complied with some compelling footage of the group in action. But this is no dull representation of a Contrast show; instead, the band plays with color and light, and warps the space around them as they play. Shots are saturated with monochromatic illumination – but then a different hue will flash across the flame, or the image of a bandmember will warp or smear. There’s a feeling of destabilization that permeates the clip – a sense of psychological deterioration, peril, and the stealthy approach of madness. Masks, fireworks pinweels, bandages, old stock footage of airplanes, dust clouds and blur effects: they all serve to literalize Reid’s mental state, and make the encroaching darkness palpable for the audience.

Jim McGarry and Bill Pascuzzo are the men behind the magic at Rainbow Quartz, and we are ever-appreciative of their efforts to deliver the finest music videos to you and your viewers! We have enough copies of Underground Ghosts to go around for all of your on-air giveaway needs, so please drop us a line here to make it happen! If you need more info, call Andy Gesner at 732-613-1779 or e-mail us at info@HIPVideoPromo.com. You can also visit www.TheContrast.net to find out more about The Contrast.

For info on The Contrast’s previous video “Ink” click HERE