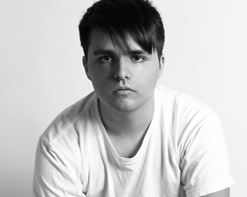 Lots of artists tell the story of how they discovered their love for music at a young age. For Daniel Correa, it’s a story unlike any other. While on family vacation a four year old Daniel repeatedly tugged the sleeve of the venue’s performer, repeatedly begging to be let on stage. The musician reluctantly handed him the mic.  He smiled, began his count, “1, 2, 3…” and then launched into a blazing rendition of Lenny Kravitz’s version of the Rock classic, “American Woman.”  He brought down the house.

This unconventional, unabashed approach to perform and find the spotlight has suited Daniel well. On his new album, Progressions, Daniel delivers an innovative blend of alternative rock and pop. They are a high-octane testimonial to the exhilaration, yearning, and angst that defines coming-of-age.

On his new single, “Don’t Stop,” this Frost School of Music (U of Miami) student has combined his passion for performing with the chops and skills he has learned through his studies. It is a brilliantly realized song blending pop sensibilities with a rock/reggae heart. When it came time drop a visual, it should come as no surprise that Daniel would push the envelope in terms of expectations and execution!

“Don’t Stop” is a video like we’ve never seen before. This animated clip is part comic book panels, mixed in with a vibrant story told in a style reminiscent of the days of early internet/late 90s animation. Of course, it’s all done with a modern sheen, feeling like a tribute to the era. It follows an animated Daniel as he hits the streets of South Beach, recruiting a crew of people on Ocean Drive and leading them away from their mundane day jobs into the club. He takes the stage to lead the crowd in a cathartic performance of bright lights, dancing, DJs, and an insanely good time.

We hope you’ll give this fun-filled, eclectic new video a chance in your programming and embrace the unique approach of Daniel Correa. We’re here to do anything we can to get this video into your music video programming, so please contact Andy Gesner and the HIP Video Promo staff at (732)-613-1779 or email info@HIPVideoPromo.com. You can also visit www.DanielCorrea.com for more info on Daniel Correa.