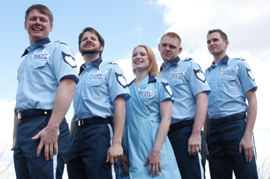 Hello to all my tremendous video programmers throughout the country! It’s Andy Gesner and the staff from HIP Video Promo with an incredible new video from the musically spirited Danielson. We’ve followed the career of Daniel Smith – aka Br. Danielson, the oldest brother and chief conceptualist of the Danielson Famile – ever since he turned his Rutgers senior thesis into one of the strangest and most beguiling debut albums of the Nineties (I even had the band play at the Budapest Cocktail Lounge in New Brunswick when I was booking bands there in the late ’90s). Since then, Danielson has continued to walk a singular path, launching the Sounds Familyre imprint and releasing records that feel simultaneously rustic and sophisticated, earthy and deeply spiritual, experimental and approachably simple. Along the way, Smith has moved from a micro-label to the slightly larger Secretly Canadian Records, but the spirit of his music remains intuitive, collaborative, and resolutely independent. He’s made records with siblings and alt-superstars alike, and he’s inspired everybody he’s drawn into his orbit.

On Ships, his musical partners have gathered together to return the favor. Smith drew up a list of everybody he’d worked with, and brought them together for the album sessions; unsurprisingly, they all answered the call, and they produced so much material that Danielson will be releasing a series of 7” singles to contain the spillover. Sufjan Stevens (whose Seven Swans was produced by Br. Danielson) appears, as does Serena Maneesh, Deerhoof, Why?, and many other luminaries who’ve contributed to the Danielson enterprise since its inception. But while all the well-known guests leave their mark, Ships is a Daniel Smith project through and through – full of all the twists, turns, quirks, vertiginous drops, and moments of near-unbearable clarity that we’ve come to expect from him.

Danielson albums are always warmly received, but the reviews of Ships have been exceptionally glowing. The consensus is that it’s the best album Smith has ever worked on, and we’re inclined to agree. “The 11 tracks do not disappoint, striking the perfect balance between dissonance and melody with a backbeat that shakes the foundations of everything Danielson has tried before”, raves James Christopher Monger of the All-Music Guide. Filter magazine agrees, calling the album an “explosion of greatness”, and praises it as the purest sounding of Daniel Smith’s unique voice.

“Did I Step On Your Trumpet” is a prime example of that combination of irreverence and earnestness that’s so characteristic of Smith’s writing. The Danielson website explains the title: as a middle-school band-member in suburban South Jersey, Smith was accused by a fellow musician of crushing the bell of an antique trumpet. To this day, the singer doesn’t know for sure whether he was responsible for the incident or not – and his memory of the misfortune has netted him a personal byword for accidental offense. Smith animates his question with music that twinkles and wails, full of sandpaper-rough acoustic guitar, synthesizer, xylophone, and snare. Above it all is his voice: a singular instrument capable of leaping from a sedate purr to an emotional caterwaul in the space of a quarter-note.

The Danielson band is well-known for its outrageous costuming: they’ll be in homemade uniforms again for the Ships tour. Smith himself made indie headlines by performing onstage as an eight-foot tree. J. Christian Palladino’s amusing clip for “Did I Step On Your Trumpet” thematizes the group’s theatricality. Smith is shown on a community-theatre stage as two-dimensional cardboard costumes – each with a cut-out at face-level – slide in from the eaves. He appears (briefly) as a strongman, a pirate, a robot, a sailor, a cheerleader, Little Bo Peep, et cetera; all depending on the lines he’s singing. A chorus line of enthusiastic female singers in Danielson uniforms rush on and offstage, answering his lyrics with props and gestures. Later, they’re joined by the rest of the band, and the whole company executes a dance that’s straight from the second-grade musical playbook. It’s all immensely charming and defiantly weird, and it captures the childlike and renegade spirit of Danielson in action.

Here at HIP we are ecstatic to be working once again with Jonathan Cargill and his remarkable staff at Secretly Canadian to bring you Danielson’s eclectic new video. We had the chance to work with Secretly Canadian earlier this year with the I Love You But I’ve Chosen Darkness clip, and are ready to bring Danielson to you full force. We’ve got a slew of Danielson’s new disc, Ships to meet all of your on air giveaways and contest needs. Look for Danielson to hit the highways of the US in the new year after returning home from an extensive European tour. If you need more info, call Andy Gesner at 732-613-1779 or e-mail us at info@HIPVideoPromo.com. You can also visit www.SecretlyCanadian.com or www.Danielson.info to find out more about Danielson.