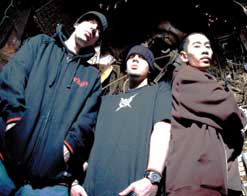 Hello music lovers! It’s Andy Gesner and the staff from HIP Video Promo with another intriguing video. Card players, sports bettors, and fans of professional poker know bodogMUSIC from tournaments and online gaming. But bodog is also a record label – and lately, it’s one that’s been making a considerable amount of noise. The company has been releasing records by some of the most adventurous acts in Canada, and marketing them with the same combination of aggressiveness and acumen that has made their website a must-visit destination for anybody serious about winning money over the Internet. With the signing of Dead Celebrity Status, bodog has pulled off a coup – not only have they added three north-of-the-border hip-hop legends to their expanding roster, but they’ve acquired the rights to the red-hot Blood Music, one of the most talked-about Canadian underground releases of the past few years. America – and the rest of the world – are about to learn how exciting this rap crew can be.

Real hip-hop aficionados will recognize the members of Dead Celebrity Status instantly. Emcees Yas and Bobby were originally members of the Project Wyze duo – one of the first acts to prove that Canada had something significant to contribute to rap music. Yas and Bobby have been fearsome battle emcees for more than a decade, opening shows for Public Enemy on their Fear Of A Black Planet tour, and exploring rap-rock and rap-hardcore hybrids long before the fusion was fashionable. DJ Dopey is internationally recognized as the man to beat in any turntable showdown; he won a world championship in the art form in 2003, and held the Canadian title for several years before that. Dopey, who has worked with Saukrates, Choclair, and Main Source, has developed an intensely musical style on the wheels of steel, effortlessly simulating percussive and instrumental sounds using nothing but vinyl, faders, and his own phenomenal dexterity.

Blood Music captures this exceptional combination of musicians at the top of its game – and, just to up the ante, adds an extra dose of outrage and defiance to the already volatile mix. Guest musicians D.J. Lethal, Bif Naked, Dave Navarro, and Joss Stone (among others) contribute their talents to the set, but never overshadow the trio. As with Project Wyze, Yas and Bobby occasionally inject hard rock elements into their hip-hop tracks – but they always remember to keep their funk squarely in place. The incendiary “We Fall, We Fall” – a broadside against a negligent entertainment industry addicted to fluff and casual idolatry – culminates in a scalding guitar solo and a brash, shouted chorus. En route to that bracing ending, Dead Celebrity Status gives the listener everything in their arsenal: deft verses, hilarious-scathing rhymes, turntable fireworks, creepy-little-kid backing vocals, and passionate performances by the veteran rappers.

The clip for “We Fall, We Fall” plays cleverly with hip-hop video and horror-flick conventions. Two preteen twin girls wearing heavy eye makeup and possessed expressions sing the chorus while stalking the halls of a scary old clinic; the reference toThe Shining is both intentional and effective. Meanwhile, in a hospital ward, patients give blood – straight to the deejay and the emcees. Tubes and intravenous wires connect the microphones and the turntables to the bloodbank, and Yas and Bobby scrawl crimson lyrics on the walls of a bare, white room. In a deliberate parody of the classic Hype Williams “hallway” shot made famous in Bad Boy videos, the Dead Celebrity Status emcees are shot in a grimy corridor somewhere beneath the hospital. As a skatepunk does flips, the two vocalists quite literally approach the camera as “underground” emcees. They spit their lyrics with great emotional force, pushing back the viewpoint as they do – just like a Puffy spot, only with hard metal pipes instead of neon lights, and venom and bitterness in place of the bling.

Here at HIP we are thrilled to be working with our friends at bodogMUSIC again to bring you this powerful clip! We have plenty of copies of Blood Music for on-air giveaways, so please don’t hesitate to get in touch. If you need more info call Andy Gesner at 732-613-1779, or email info@HIPVideoPromo.com.