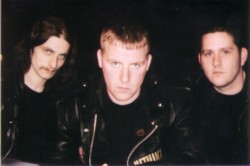 Hi, everybody, it’s Andy Gesner and the staff from HIP Video Promo, back with another exciting clip from an emerging independent band. Some days, you just want to rock – and on those days, it’s great to have a group like The Deaf Union to spin. Here’s a band that plays savage, primeval metal – a band that goes for the jugular on every bruising track. The Michigan three-piece is still relatively unknown, but they’ve already opened shows for bands like Corrosion of Conformity, Sepultura,and Zakk Wylde, toured the Midwest, and left the regional headbangers begging for more. Recently The Deaf Union has gotten good exposure on Spike TV’s notorious new detonation programBoom! You’d be hard-pressed to find a band better-suited to a television show that consists of a couple of longhaired guys blowing stuff up.

The Deaf Union’s metal is muscular, threatening, uncompromising, and dark. Their songs often build to a towering climax, but more often than not, they’ll start with a ferocious riff and pound it to hell and back. and there’s enough classic-metal low-end chugging to keep the rhythm locked in tightly saturating the whole frequency spectrum.

“On With The Dead” epitomizes The Deaf Union approach. This is heavy metal as sludge-blues: a thunderous riff that feels elemental, double-bass pedal action on the kick, live-wire lead guitar, and Gary’s guttural-but-oh-so-expressive holler. Drummer Mike Hill is the band’s secret weapon – he can slam and crash with the best of them, but his playing carries with it an undeniable undercurrent of funkiness. Just as John Bonham did, Hill knows that heavy music is at its best when it swings a little.

Patrick Lewtschawn’s video for “On With The Dead” is as disturbing and sinister as the song is. It’s set in a hellish prison – one that might be located in the bowels of hell itself. The cells are occupied by the dirty and damned, wallowing in their squalor and tortured by metal-clad, demonic figures. (Some of the costuming in the clip would make a medieval blacksmith gasp in awe, including one suit of armor that looks like a gigantic shredded tin can.) Of course, the band is here, too, singing their dark tale to the wretched prisoners and sadistic jailers alike. Presiding over this twisted scene is a glowering, mustachioed barbarian – halfway between Genghis Khan and Mephistopheles. Unsurprisingly, the evil monarch really digs The Deaf Union; he smiles as they play, and he claps his hands slowly and diabolically to the beat.

Shot in sick greens and cold, industrial grays, Lewtschawn’s grim clip presents the band as dynamic, fully complicit participants in this warped tableau. Gary is shown in profile, spitting his words into the microphone with bug-eyed contempt and barely-controlled rage. When the prisoners bend the bars of their cages and pour out into the pit in front of the stage, the video cuts rapidly between the fetid escapees and Gary’s angry rictus, bathed in an infernal red light. Not only does the Deaf Union’s music empower the prisoners, it overthrows the evil king and restores the benevolent queen to power. Good triumphs over evil.

We always love helping deserving bands find their way onto the national radar, and that’s why we’re so excited about this promotion. We are fully stocked with Deaf Union CDs for giveaways for your viewers. If you need more info, call Andy Gesner at (732) 613-1779, or email info@HIPVideoPromo.com.