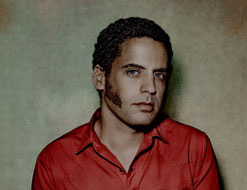 Howdy programming friends, it’s Andy Gesner from HIP Video Promo, here with a pair of great clips from an artist with manifest international appeal. Depedro sings his inventive songs in Spanish. But emotion is a great universal language, and there’s no fan of adventurous alternative pop who won’t be able to follow tracks like the gorgeous “Tu Mediodia” and the playful “Comanche”. Nubes de Papel, the latest Depedro album, will be out in the singer’s native Spain a month before its American release, but that’s just a way to gather traction: hip stateside audiences already know this talented guitarist and singer from his successful term as the touring guitarist in alt-country favorites Calexico.

Jairo “Depedro” Zavala’s history of collaboration with the heralded Calexico is impressive. He co-wrote “Victor Jara’s Hands” and several of the band’s other popular songs, and he’s been an energetic onstage presence at Calexico shows for the past few years. They’ve returned the favor, recording his first album and backing him up on his national tours. Calexico frontman Joey Burns sings with Depedro on several tracks.

But this is no Calexico side project. Zavala is a fully-formed artist, and one who has developed a distinctive voice of his own. His six-string playing is fluid, effortless, frequently brilliant — it’s a fusion of North American pop guitar and Spanish traditional styles, and it sounds unlike anything else in contemporary music. On “Tu Mediodia,” the guitar part shadows the haunting melody, commenting on it, reflecting it, deepening its seductive hold on the listener. He can be arresting, too: “Comanche” is a slice of celebratory border blues-pop, and his six-string rises to spar with a battery of horns. “Comanche” is actually a single from his prior self-titled full length, but since we’re such strong believers in this artist, we are bringing you this clip too!

There’s plenty of footage of Depedro playing guitar in the beautifully-shot clip for “Tu Mediodia.” The artists strums his six-string in the deserted halls of an architectural wonder — a building with white walls, high ceilings, and wide windows. It could be a museum, but there’s no art on the walls; it could be an office, but there’s no sign of business activity; it could be a home but for the escalators. The sheer size of the structure affords the viewer some breathtaking long shots, including some that seem to have been captured by a ceiling on the roof of a skyscraper. To heighten the sense of vertigo, the screen is often split into parallel vertical frames. It’s a mirror of the singer’s emotional state: internally conflicted, longing, full of potential. He’s not the only one in the building, either. A woman walks on these balconies, too. She doesn’t make eye contact; she fades in and out of the frames like the memory of something long lost.

The “Comanche” clip is every bit as exuberant as “Tu Mediodia” is subdued. Here, Depedro is a kid again, sporting barefoot with toy cowboys and indians, tied up at the stake while cartoon clouds of smoke fill the air around him. His playmate is a kid of about eight, who discharges his murderous responsibilities with the utmost seriousness. It’s a reminder that while Depedro’s music can be impressively smooth, this master of the guitar is a joker at heart.

We’re excited to be working with Jeff Clyburn and the team at Nat Geo Music to bring you these most excellent new clips. We’re here to set you up with anything you may need to give these Depdro clips the attention they deserve, so drop us a line! If you need more info, call Andy Gesner at 732-613-1779 or e-mail us at info@HIPVideoPromo.com.