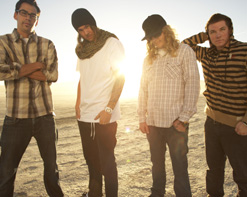 Greetings programmers! It’s Andy Gesner and the staff from HIP Video Promo, here with a brand new clip from a Huntington Beach band poised to explode into mainstream consciousness. Sublime, alas, isn’t with us anymore – the landmark ska-punk group disbanded after death of the multi-talented Bradley Nowell, and big-sky Southern California instantly became a little less sunny. But now The Dirty Heads have arrived, and the clouds have parted. Just like Sublime, the Heads play a dazzling amalgam of scruffy rock, sparkling folk, reggae, and hip-hop; their songs are catchy, party-friendly, and thoroughly Californian. Any Port In A Storm, their upcoming debut, is a warm beach day condensed into a compact disc. And “Stand Tall”, their lead single, looks likely to extend this summer by a few weeks at least (and possibly indefinitely!)..

The Dirty Heads leave listeners with no unanswered questions: the band knows exactly who they are and what they want to do, and so far, they’ve made all the right moves. “Stand Tall” made its first appearance in the 2007 animated hit Surf’s Up; other tracks from Any Port In A Storm will be featured in Matthew McConaughy’s upcomingSurfer, Dude. The group has toured with the like-minded 311 and their spiritual kin in Fishbone; they’ve shared stages with Matisyahu, Rock The Bells, and the Kottonmouth Kings. They’ve already placed a track in Tony Hawk’s Downhill Jam, and their music has been licensed for use on Shark. When Any Port In A Storm arrives in stores later this week, anybody who has been paying attention will know exactly what to expect: good-time music, radiant with positive vibes, gorgeous production, and hooky choruses.

They’ve chosen all the right collaborators, too. Any Port In A Storm was co-produced by Stan Frazier, the drummer for Sugar Ray; he’s imparted some of hi s own band’s genre-defying irreverence to The Dirty Heads’ songs. The well-traveled and widely-respected Alex Acuna (Paul McCartney, Joni Mitchell, Peter Gabriel, Weather Report, too many others to list) makes a splashy guest appearance. Any album adventurous enough to include collaborations with the immortal Billy Preston and dancehall heavyweight Tippa Ire is casting a wide net; what’s really exciting is that all these experiments succeed wildly, testifying to the marvelous elasticity of The Dirty Heads sound.

Huntington Beach – “Surf City USA” – is long and wide and beautiful, and it dominates the consciousness of everyone raised there. The humorous clip for “Stand Tall” doesn’t begin on the coast, but it clearly begins with a longing for the sun and surf. On a bright Californian day, the members of The Dirty Heads are stuck together in a suburban garage; as frontman Dustin Bushnell sings toward the camera, the other members of the band paint and otherwise outfit a rickety-looking rowboat. Are they at a beach house, poised to drag the craft a few feet to the open sea? Not likely. Instead, they cart the boat across a city’s commercial center, and slide down a grassy slope as if they’re crashing around between waves. It’s only after a comically long trek that they reach the shore. When they do, they launch the punt into the sea (we’re treated to some very refreshing-looking underwater footage) and crowd into the boat. But before it goes more than a few feet, it’s sucked underwater all at once – and the musicians are deposited back in their crowded garage.

We are proud to be working with Jacob Cap at Executive Music Group (EMG) to promote the new feel-good video from The Dirty Heads! We also have a healthy supply of their new CD Any Port In A Storm for all of your on-air giveaway needs; so don’t hesitate to get in touch for your copy today! If you need more info, call Andy Gesner at 732-613-1779 or e-mail us at info@hipvideopromo.com. You can also visit www.DirtyHeads.com to find out more about The Dirty Heads.