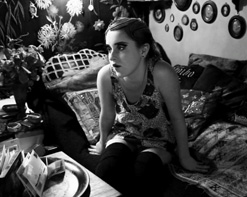 Take me to Paris, I want to revel in the history and fashion and dance near the Eiffel Tower. I want to sing on the rooftops of Europe and float atop the Seine. Dream no further programmers, we will take you there! It’s Andy Gesner and the HIP Video Promo team here with a self-made musical rebel of society and production guru named Ducky. Join her in a trip through sonic experimentation in one of the world’s most beautiful realms in her video for “Wind-Up Bird.”

Ducky is the labor of love of San Francisco born songstress Morgan Neiman. At thirteen, she seized a year-long school project as an excuse to buy Logic and a cheap microphone. By sixteen she was spinning clubs around San Francisco, and a year later she dropped out of high school to attend NYU’s Clive Davis Department of Recorded Music. Ever since she has been making a name for herself in the indie pop scene, making treks around the Upper East Coast, playing shows from dingy dives to Webster Hall NYC. She’s played with acclaimed group Sherman Ewing, Fool’s Gold artists Danny Brown, Action Bronson, and Party Supplies, Rioux, Punches, Dirty Fences, and Converse “Get Out of the Garage” Contest winners Beast Make Bomb. Ducky is known to put on an extravagant live show that features two teddybear vixens dance with her on stage, half go-go, half girl group.The Village Voice recently described Ducky as “enticing Peaches-meets-Twista electro-blitzkrieg vibe, complete with attractive stage dancers and a giant bunny doing the running man.” She has also been featured in Hypebeast and Impose, and in a prominent article in Waterblock NYC, who praised Ducky’s originality, describing her as one with “a very unique sound.”

On tape, this duckling’s coke-binge beats turn soft and bittersweet over buzzing bass. “Wind-Up Bird” is full of infectious percussion and synths, vocals that skip from soaring to sweet, and a chest-rattling kick that’s guaranteed to move your feet. It’s a transportive experience to an ethereal pop world you won’t want to leave anytime soon. Having a ton of experience in production, Ducky’s work is layered with instruments that fill each range, making the mix complete in every aspect. The indie pop music scene is bubbling with self-made stars like Kerli who break out of the mold of the mundane radio hooks without out abandoning their catchiness, and Ducky is set to be among the leading contenders. The video was filmed in Paris and features Ducky dancing visiting some beautiful locales. The whole clip is shot in breathtakingly crisp black and white and really blends well with the mood of the track.

We love it when artists take the wheel and create wonders in the studio. “Wind-Up Bird” is the leading single from Ducky’s summer EP entitled The Glamorous Gutter, available now in major internet retailers. We’ve got Ducky goodies for giveaways and contests, so please let us know if you’d like some sent your way. If you need more info, call Andy Gesner at 732-613-1779 or e-mail us at info@HIPVideoPromo.com. You can also visit www.DuckyMusic.com to find out more about Ducky and any shows near you.