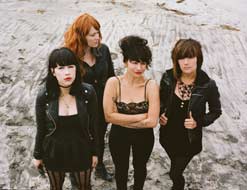 We know all about the sound tearing through the American underground – it’s defiantly lo-fi, delightfully murky, gauzy, blissed-out, garage-retro, and sticky as bubblegum. And nobody does it better than the Dum Dum Girls. The Los Angeles quartet was the talk of South by Southwest ’10, and I Will Be, their recently-released full-length, is already drawing raves. The album’s amalgam of psychedelia, Sixties girl group insouciance, Pavement-inspired alt-pop and acid-drenched d.i.y. attitude makes it the must-have set of the spring. Pitchfork raved about I Will Be, calling the album “giddy” and “exquisite”, and praising frontwoman Kristin “Dee Dee” Gundred for her pop smarts and coy, provocative singing.

Dee Dee has only been at it since 2008 – I Will Be is the first full-length by Dum Dum Girls – but she’s already picked up some well-known friends. Frankie Rose, late of Crystal Stilts, the Outs, and the Vivian Girls, adds her distinctive, imaginative drumming to the project. Nick Zinner of the Yeah Yeah Yeahs plays hot-wire guitar on one track. Dum Dum Girls have shared bills with Male Bonding, Girls, the Crocodiles, and many other d.i.y. luminaries. Finally, Dee Dee scored a production coup: the legendary Richard Gottehrer is behind the board for I Will Be. Gottehrer, writer of “My Boyfriend’s Back” and “I Want Candy”, and producer of Blondie, Link Wray and the Go-Gos, has helped the band achieve a timeless sound at once thoroughly contemporary and deeply rooted in classic pop 45s. He’s even polished a few of the rough edges (just a few!) and placed the emphasis where it should be – squarely on Dee Dee’s hooky songwriting.

With “Jail La La”, Dum Dum Girls have delivered a single infectious enough to pull mainstream listeners into the underground haze. Coming on like a distressed version of the Shangri-Las, Dee Dee and her bandmates spin a fractured tale of sex, desire, and imprisonment. Video director Christin Turner is in perfect tune with the group – her inspired clip for “Jail La La” echoes Sixties art cinema, trashy women-in-prison flicks, 120 Minutes-style late-Eighties music videos, and archival girl group footage. The film is grainy (of course), a little bit jumpy (which suits the song), experimental, and profoundly communicative. Most of it is shot in muted grayscale, but a few details are colored in – Dee Dee’s red lipstick, for instance. In one arresting sequence, words are scrawled on the screen while the frontwoman’s lips and tongue continue to “la la” at the camera. Elsewhere, she cruises the highway on a gorgeous motorbike, gets arrested, poses for a mugshot, and hugs her worried boyfriend. We don’t see his face – he’s busy kissing her neck – but we do watch hers. In his embrace, she takes drags of her cigarette, her expression impassive, inscrutable, and more than a little mysterious.

If you need more info, call Andy Gesner at 732-613-1779 or e-mail us at info@HIPVideoPromo.com . You can also visitwww.SubPop.com and www.WeAreDumDumGirls.com to find out more about Dum Dum Girls.