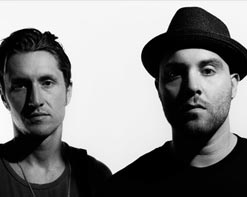 LA’s Early Morning Rebel is one of those artists that not only delivers music that you’ll feel in the pit of your stomach, but also shows a slick back for all of the other elements of a beautiful visual presentation, mixing music, film, art, and fashion all in one offering.

Early Morning Rebel gained their greatest level of attention when their song “Life Boat” was featured in Grey’s Anatomy, prompting People Magazine to say “It’s easy to hear why this LA band’s aching ballad has provided a salve on Grey’s Anatomy.” Soon afterwards the band was invited to perform at fashion weeks in New York, London, and Paris, making fans of Kirsten Dunst, Orlando Bloom and Drew Barrymore. They also grabbed more positive press from Details, BlackBook, and Vogue Italia, among others.

This is a band that won’t bash you over the head with volume and angst, but rather use quiet and silence as their most powerful tool. Their new EP, Life Boat, spends a good duration on the lower end of the decibel spectrum, creating emotion and anticipation along the way. When the songs do peak and reach their apex they have audiences eating out of the palm of their hands.

This peaks and valleys approach to their music carries over to their videos as well. In both “Shallow Breath” and “War On Love” the band relies almost entirely on black and white footage (save for a few color shots in “War On Love”) to relay the message. “Shallow Breath” is referred to Early Morning Rebel’s Nathan Blumenfeld-James as a “love story between a girl and a skeleton. It reveals how this girl experiences intimacy. The skeleton singing to her is a look into what she fantasizes about.” A singing skeleton may add a small amount of quirk, but the real focus is on the female lead and her ability to mesmerize the viewer while performing completely on her own.

“War On Love” is a song Blumenfeld-James says is a song about “loving someone enough that you are willing to be wrong for the sake of being happy. It’s about sacrifice and compromise.” To compliment the tragic beauty they crafted a video that follows the flawless movements of a ballet dancer both on the streets in the studio. Blumenfeld-James says “We’re showcasing that beauty in this video, and we chose this dancer because she had the combination of innocence and rawness that felt right with this song.”

While most bands are afraid to work in the negative space, this is where Early Morning Rebel thrives and we are pleased to bring you these dynamic clips. Please get in touch so we can get you whatever you may need to get these videos into your programming. Contact Andy Genser and the HIP staff at (732)-613-1779 or email us at info@HIPVideoPromo.com . You can also visit www.EarlyMorningRebel.com for more info.