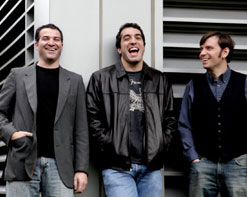 Hello programming friends, it’s Andy Gesner and the Hip Video Promo staff, eager to introduce a new band that is bursting at the seams. Elsewhere is a progressive-punk/power pop trio from Boston, who combines the energy of punk and pop with the ambition of progressive rock. Their refined angst make them hard to ignore, and their easy-going style releases certain elements of classic rock that leave you wanting more. The band consists of three seemingly every day guys with (for now) corporate day jobs who truly enjoy playing and recording music despite the dysfunction of the industry, and HIP Video Promo is here to deliver their debut single titled “1981,” which brings forth a high-energy of live performances and straight forward rock.

The provoking music of Elsewhere combines contemporary/modern rock music, classic rock, and pop elements that pull listeners in close. With sounds that can be compared to Rush, The Police, and moreover, The Sex Pistols, Elsewhere delivers a reflective and upbeat combination of music that will leave you in a state of high, positive energy. It is clear that the music of this band will leave you in thought provoking states, setting forth a contemplative vibe. The creative elements of this trio are so powerful, and it can be understood that they truly love what they do—playing music. The band’s music has received a large amount of local airplay on radio shows, film, and television (soundtracks on MTV) and they have performed tirelessly throughout the Northeast. The band has been working hard together as over-sexed adolescents for many years, and the debut of their new EP titled 1981 proves that their love for music has not wavered

The video for the anticipated song “1981” proves to be a reflective, but powerful and upbeat song about a bittersweet revisit to the past. The band does a great job at setting forth ideas that every one would love to go back in time—back to when life was more carefree. The song hints at that, but with a combination of references and flashbacks. to the sun and the summertime, we can see that it is no bother to this band if they can go back to the past or not, or so we think. The song itself is a catchy tune, and all of the elements, such as those of punk, pop, and alternative rock, are present. Although they hint at these elements, there is not one artist or sound that they sound like because their creative ability and sound is so unique.

It is with bands like Elsewhere that we can see an upbeat and charismatic side to music. With songs like that of “1981,” we can understand the importance of loving what you do, and letting work just be work. HIP Video Promo is proud to be introducing such a down to earth band that presents concrete lyrics that revolve around certain ideas that pertain to every day life. The creative background of this band is incredibly strong, and it is clear that they have been influenced by the many famous bands of the past, such as The Police, Queen and Rush. Artists like Elsewhere come along only once in a while, and it is rare to have such a creative collaboration at hand. If you’d like more info, contact Andy Gesner at (732)-613-1779 or email at info@HIPVideoPromo.com. You can also visit www.Facebook.com/ElsewhereBand,www.Twitter.com/ElsewhereBand or www.Elsewhere-Band.com for more information about Elsewhere.