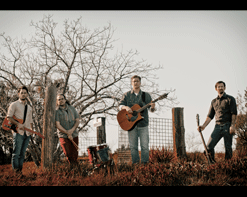 This train is bound for glory, oh this train…” the members of the band ERLAND huddle together and belt this old tune by Woody Guthrie every time before stepping on stage. The song not only warms up their voices for the harmony infused set they are about to perform, it also represents the belief they have in the music they create together. The self-proclaimed mantra embodies a collective feeling the four members share, born from the unlikely assembly of a young band that has quickly accomplished so much. From recording a fan-funded full length album, to self-funding a nationwide tour, ERLAND can’t help but feel their future is bright and they are in complete control. The band’s story finds its beginnings with their front man from which the band bears its seemingly peculiar name; Erland Wanberg.

Music has been the focus of singer/songwriter Erland Wanberg’s life since he was a child. Blossoming from an early obsession with The Beatles, the realization that music was his calling came from the first time he picked up a guitar and discovered he could write songs; “Looking back, they weren’t very good”, Wanberg laments. Things have changed considerably since then. The largest turning point in Wanberg’s career was in the summer of 2011 when he stepped into the studio with musician and brother-in-law Andrew McMahon of Jack’s Mannequin. McMahon had taken a liking over the years to Wanberg’s rustic yet imaginative styling, and decided to lend a hand and ear with producing the recording of Erland’s first EP. No one knew what to expect when the two stepped into the studio together; a combination of McMahon’s pop/punk personality and Wanberg’s warm soulful acoustics seemed an unlikely match. In the studio, inspiration swirled while McMahon infused his heavy pop inclinations with subtle vigilance, catapulting Wanberg’s sound into the modern arena while still retaining his inherent charm. The result was a sound that reawakened Wanberg’s imagination, and drove a new sense of purpose for his career.

Wanberg’s next move was to assemble a band that could bring his songs to life and continue to build on what he and McMahon had created in recording the EP. He called upon local musicians Nathan Keezer, Marko Srdanov, and Michael Mooneyham. These picks were essentially a shot in the dark, yet somehow managed to fuse into exactly what Wanberg was looking for. Only a month after its inception, the band was invited to open for Jack’s Mannequin at the Viper Room in Los Angeles. After this debut performance, the band ERLAND was officially on its way. The next year was filled with milestones for the young group, highlighted with recording a full length album co-produced by McMahon, and landing the spot as supporting act for Andrew McMahon, Kate Earl and Barcelona on a sold out nationwide tour.

The first word that comes to mind when viewing the opening scene of the video clip is free. “My Love” is filled with such serene images that take you to places filled with love and hope. ERLAND’s voice is what makes you surrender your heart and mind to the dominant chords of the songs, and the whimsical settings do nothing but inspire and open up one’s mind. “My Love” is a tune that is classic and timeless, and includes just the right amount of sappy love imagery alongside images of cascading fields and the sea.

ERLAND’s influential music is strong and noteworthy, and his newest video clip “My Love” is nothing but. As you view the images of calm and serenity, you will find that you also have a different take on the tune itself, but that is exactly what ERLAND has professed he wants his music listeners to do. In the end we will all walk away with a different meaning tied to each lyric, but above all, we will feel calm and collected. For more information on this astounding new artist, please contact Andy Gesner and the HIP Video Promo staff at (732)-613-1779 or email us at info@HIPVideoPromo.com . You can also visit www.Facebook.com/erlandmusic for more info.