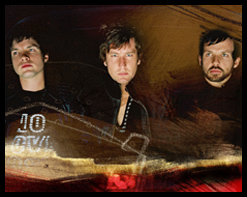 Hey, music video lovers, it’s Andy Gesner and the staff from HIP Video Promo, here to introduce you to a terrific band that has already won over its home continent. Now, we don’t suppose you follow Aussie contemporary radio too carefully, so you’re forgiven if you haven’t yet heard of Eskimo Joe. But if you’d spent any time Down Under, chances are, you’d already be a fan. The trio is now one of the hottest bands in Australia, and Black Fingernails, Red Wine, their latest release, held the top spot on the ARIA (Australian) Music Charts for much of 2006. The album spun off several hit singles – including the Aussie-blockbuster title-track – and won Eskimo Joe a prominent slot at the Sydney Live Earth show. The Perth-based band swept the ARIA and Western Australia Music Awards this year, and the “Black Fingernails, Red Wine” clip earned the group a nomination for Best Video from MTV Australia. With a successful trip to NYC for the 2006 CMJ Music Marathon behind them, Eskimo Joe is primed to conquer the Northern Hemisphere.

Eskimo Joe’s sound is rich, moody, and engrossing, but bassist Kavyen Temperley’s skillful and articulate songwriting is the best weapon in the band’s arsenal. Temperley thinks conceptually: A Song Is A City, the band’s breakthrough album, is a nuanced and provocative exploration of his hometown of Fremantle, Australia. Through song and story, he captured the strange tensions between cosmopolitan living and geographic isolation so common on the Aussie West Coast; listeners around the country identified, and rewarded the band with their first hit disc. Black Fingernails, Red Wine, by contrast, was a conscious attempt to broaden and streamline the Eskimo Joe approach, and to incorporate elements associated with Eighties rock. Just as he did with The Sleepy Jackson – another Perth-area band that has made international waves – producer Matt Lovell has delivered a polished, radio-ready sound that sacrifices none of the integrity or identity of the band. Old fans adored Black Fingernails, Red Wine, and new fans were made by the thousands: while A Song Is A City went platinum in Australia, the latest Eskimo Joe release has sold four times more.

Video director Nash Edgerton is almost as well-recognized Down Under as the members Eskimo Joe are: he’s an actor and performer as well as a filmmaker, and his recently-released first feature was a hit at the Sydney Film Festival. Edgerton has shot clips for many of Australia’s finest, including Toni Collette, The Sleepy Jackson, and Ben Lee. For the “Black Fingernails, Red Wine” spot, the young director has taken a dramatic (and black comic) approach: it’s a dark night in Western Australia, and the three Joes are out on a kidnapping spree. We watch Temperley and his two bandmates abduct three men, and shove them in the trunk of a vintage automobile; later, as the song arrives at its false ending, they strike the business ends of their spades into fresh earth. They’re burying bodies tonight – but whose? All is revealed when the well-dressed musicians pop the boot and Edgerton swings his camera on the faces of the victims: they’re Eskimo Joe, or to be more precise, a prior version of Eskimo Joe that’s now defunct. Temperley and company have hijacked their own history, forcibly seized it, and sent it into the ground. No clearer metaphor for a band’s reinvention has ever been committed to videotape!

Our introduction to Billy Fields and the folks at Rykodisc has been very exciting and we’re very proud to be working together to bring you this deserving video, and we thank them for all of their hard work. They have hooked us up with plenty of copies of Black Fingernails, Red Wine for all of your on-air giveaways and contest needs. The band will also be making appearances in select US markets in August so get your interview requests in now! If you’d like more info, call Andy Gesner at 732-613-1779 or e-mail us at info@HIPVideoPromo.com. You can also visit www.EskimoJoe.net to find out more about Eskimo Joe.