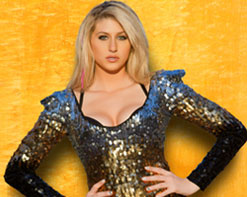 Hello cherished programming friends, it’s Andy Gesner and the HIP Video Promo staff here with a daring pop starlet who has been stirring up quite the commotion around the country and the internet gossip websites. Her name is Eva and, as indicated by any of the pop divas who can hang with a one word name, she means business! Eva’s new single “Not My Daddy” is actually a track that was penned by Ke$ha and originally meant for her debut record Animal. Now Eva has hooked up with chart topping superstar, and made the track her own, with a guest appearance by rap sensation Gucci Maine.

Eva has been making waves in the industry for the past two years by teaming up with some of the biggest names in the biz. On her previous record, Eva enlisted the help of hip hop superstar Snoop Dogg on the EP’s lead track. It was produced by hip hop and R&B hit maker Poli Paul – who has produced hits for Christina Milian and Chingy. The record also included song collaborations with Grammy Award winner Krayzie Bone of Bone Thugs-n-Harmony fame. Eva also worked with some of the other top producers in music, including J.R. Rotem and Scott Storch. The tireless and energetic singer is currently supporting the current single with a 3 months multi-cities club tour.

Her newest standalone single has already generated an immense amount of buzz over the internet world. “Not My Daddy” has especially resonated amongst the pop gossip crowd, reaching dozens of sites such as Pop Justice, Pop Awesome, and Pop Boi. It’s has also gained recognition on iTunes News & Noteworthy and the front page on Masterbeat.com There’s no reason that it shouldn’t be causing such a stir. The song is laced with immensely catchy hooks from both, the synth and Eva herself. The lyrics reflect the wild and untamed attitude of the modern young woman, who makes her own decisions and decides her own level of fun. This ode to independence sends a positive message to youngsters everywhere, reminding them that their significant others should never be allowed to limit their growth and inhibitions. That job is reserved for parents!

Eva makes sure to turn up the heat in this no-holds-barred clip, which features her dressed to kill from head to toe and in control of submissive boy toys. The video employs a clever approach that simulates Eva’s desires through swift clicks of the mouse, as if the starlet is commanding her will digitally. Eva covers her victims in mud, slaps them around, and presses them into formation with her massive (and rather glamorous) heels. The result is sexy and naughty, without ever being too graphic. As Albert Einstein once said, “Imagination is more important than knowledge.” Eva knows her strength lays in the power of showing just the right amount of wrong, as well as an array of stylish outfits.

Everyone here at HIP is stoked to be part of this feel-good summer anthem and hope that you will join in on the fun. Eva is a diva in the making and we aim to help lay the carpet as she takes her royal steps. We’ve got lots of Eva stuff here at HIP HQ, so be sure to reach out.