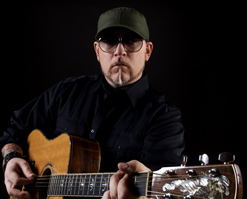 Greetings programming community! It’s Andy Gesner and the staff from HIP Video Promo, here with the latest clip from a visionary entertainer with a populist streak and a deep understanding of music history. Everlast has had a wide-ranging and multifaceted run in the music biz: he’s hit the top of the charts with House Of Pain and “Jump Around”, won a Grammy as a solo artist, and collaborated with everybody from RUN-DMC to Cee-Lo to Madonna. His music is two-fisted; it’s bold, it takes no prisoners, and it’s invariably great to party to. But behind his roughneck guise, there’s generally been a clever message – his early work, for instance, drew a firm and unmistakable connection between African-American rap and blues and rowdy Irish-American drinking music. The Irish were once an underclass in this country too, he reminds us, and their celebrations were spiked with the same kind of energy, aggression, and longing for release.

On Whitey Ford Sings The Blues, his heralded second solo album, Everlast forged an entirely personal style out of disparate material – hip-hop, vintage R&B, acoustic folk, leftfield deejay music, cowboy soundtracks and Southern rock. “What It’s Like”, the single from that set, remains one of the most moving songs of the Nineties: a statement of solidarity with the downtrodden that has become, if anything, even more resonant with the passing of time. With subsequent releases, Everlast has moved closer and closer to the outlaw country tradition, echoing and updating the work of Nashville renegades like Johnny Cash and Waylon Jennings. Love, War, And The Ghost Of Whitey Ford, his upcoming release, embraces the style fully with an inspired cover version of Cash’s classic “Folsom Prison Blues”.

It’s an uptempo, fully Everlast-ed version of the Cash number, mind you. Instead of a guitar solo, he’s incorporated a deejay break and a haywire analog synthesizer solo. The rhythm track bounces along on an explosive groove that wouldn’t have been out of place on the first House Of Pain album. Yet everything here is perfectly in keeping with the tone and feel of the original: it’s still a harrowing story, filled with remorse and a wild wish to escape, and Everlast delivers it in voice heavy with regret. When he sings about shooting a man in Reno just to watch him die, he’s as believable as Cash ever was – and that’s saying something.

The engrossing clip for “Folsom Prison Blues” unites Everlast on stage with Cash – digitally, if not spiritually. The singer and rapper has gone searching through the archives for footage from Cash’s successful variety show, and has cleverly interspersed his own performance shots with those of the Man In Black in action. The audience, of course, is Cash’s own: when the camera pans the crowd, it’s styles and faces from the Seventies we see. But it’s Everlast onstage, and although he looks fantastic in period dress – hat, cowboy shirt, and acoustic guitar – he’s backed by an organist with a patch-bay synthesizer and a cutmaster on the wheels of steel. Johnny Cash is there, too, or he appears to be, anyway, smiling in approval at Everlast and strumming his own six-string. The period-specific video tricks (original titles, split-screens) add to the illusion, but it’s Everlast himself who casts the most convincing spell. At the end of the clip, he reaches across time and genre to clasp hands with Cash, and you’ll swear that the country legend is really there. Everlast certainly seems to believe Cash is there – and he’ll make you believe.

It is a sublime delight to be working with Kristen Worden-Harris at the crew at Croshal Group on the new Everlast “Folsom Prison Blues” music video promotion. The label has outfitted us with a sufficient stock of the album Love, War, And The Ghost Of Whitey Ford, so don’t hesitate to get in touch for all of your on-air giveaway needs! If you need more info, call Andy Gesner at 732-613-1779 or e-mail us at info@HIPVideoPromo.com. You can also visit www.martyr-inc.com  to find out more about Everlast.