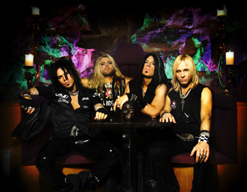 Hello fellow rockers! It’s Andy Gesner and the staff at HIP Video Promo, hoping you are ready for some serious rock and roll action. Our next clip comes from a band who’ve not-so-modestly named their latest album World Domination – and who’ve got the sound and swagger to back up the boast. The four young musicians of Fatal Smile are Sweden’s most formidable practitioners of the power metal style, and in Scandinavia, they’re already recognized as stars. And they’re no strangers to these shores, either: they’ve toured in the States several times, and rocked the Metal Meltdown festival here in New Jersey. Hard rock fans in the U.K. are wild for the band – and on their recent swing through Britain, Fatal Smile was greeted by enthusiastic crowds and positive press notice. Little wonder, then, that Vince Neil of Mötley Crüe has joined forces with Final Smile for an upcoming European tour that’ll take both acts from Barcelona to Budapest and everywhere in between

It’s a logical pairing. Neil is a metal legend from the Eighties who has continued to keep his music contemporary; Fatal Smile are hard rock contemporaries who draw on the best of the Eighties. World Domination echoes the New Wave of British Heavy Metal: fans of Judas Priest’s thunder, Iron Maiden’s musical sophistication, and Saxon’s dark glamour will find much to appreciate here. Fatal Smile guitarist and songwriter “Y” is a six-string hero in the classic style – his leads are lightning-fast, fluid, stinging, and acrobatic. It’s telling that the first Fatal Smile album was produced by a veteran of Yngwie Malmsteen’s band: Y and his bandmates share their technical proficiency, their fury, and their instinctive sense of rock and roll theater with Malmsteen

S.O.B.”, the latest Fatal Smile single, features one of Y’s scalding solos. In the entertaining video for the song, the guitar lead is powerful enough to fell the band’s glowering and pugnacious opponents. Bill Schacht, the director of the clip, is an old had at capturing notorious rowdies on camera – he’s made videos for Alice Cooper, Ronnie James Dio, Zakk Wylde, and other internationally-famous roughnecks. But the “S.O.B.” pairs Schacht with his toughest customer yet: Swedish national boxing coach and former ring champion Leffe Carlsson. It’s no exaggeration to call the tattooed Carlsson the Swedish answer to Mike Tyson, and the “S.O.B.” clip proves he’s lost none of the intimidation factor that has made him a Scandinavian legend.

The menacing-looking coach greets the members of Fatal Smile in a dark gymnasium. But the rockers are spoiling for a fight, too; they approach the old combatant like contenders ready for the big bout. Soon, beautiful attendants are rubbing them down in the training room – and a gym rat even brings Y his guitar. During the solo, a fuming Leffe Carlsson is locked and restrained inside a tiny room. As the former Swedish champ hammers on the door and shakes his chain, Fatal Smile sets up and plays in the center ring. They’re the undisputed champions and title-holders – until Carlsson batters down the door with his fists, and returns to the fray!

We’re very excited to be working in direct correlation with Fatal Smile to bring you this amazing new video. They will be hooking us up with lots of copies of World Domination so drop us a line if you’d like to get your hands on some copies for on-air giveaways! If you need more info, call Andy Gesner at 732-613-1779 or e-mail us at info@hipvideopromo.com.