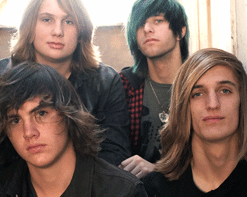 If you could take a funnel and pour the sounds of artists like Nine Inch Nails, Alice In Chains, Foo Fighters, with a dash of Blink 182 and Social Distortion, put it into a blender and raise a crop of young boys on this diet, you would end up with Southern California’s Galvanized Souls. They describe their sound as “modern grunge,” but with a focus on creating complex, rich melodies ever present in their songs. As avid students of music, this all comes naturally to the band. An explosive live show also comes naturally to them, and they recognize the importance of stage presence and always strive to put on a live show that will be a memorable and moving experience for the audience.

Their newest single for “Shut You Down” slugs its way through a thunderous mid-tempo verse that is eerily guided with guitarist Chris assuming lead vocals until frontman Zakk comes in to deliver a chorus that hits with all of the force of a rock and roll song. The vocals soar with all the might of Richard Patrick in his prime, and the riff underneath is one that is pulled out of the same playbook at STP’s Core. The production value on the song is totally epic and sounds like a million bucks. Not surprising to us, because not only does Galvanized Souls know how to rock, they also build their own guitars!

For the “Shut You Down” video, the band actually teamed with HIP alumni Jared Sagal (you may remember his “Say It” video) who has added the role of video director to his resume! The video is centered around one of the high energy live performances the band has been renowned for. The intensity is palpable and the band is in top form, but something just isn’t…….. quite right. Other scenes scan through everyday places like the convenience store, laundromat, and office and show a zombified crowd that is lifelessly drudging through their everyday lives. They’re in dire need of a pick me up and an invitation to the Galvanized Souls performance is the thing they need to bring their energy back. It only takes a few bars before the crowd is completely enthralled and there are previously lifeless zombies stage diving, doing backflips, and busting up the room around them. Sagal says the original idea for the video was something along the lines of “Cirque De Soleil and Moulin Rouge meets an early Nirvana show..punk rock stage diving meets artistic gymnastics etc.” Mission accomplished. The energy carries over until the end and only then can we the viewer catch our breath and take stock of what we just saw!

We’re very excited to be working with Jared Sagal and the Galvanized Souls crew to bring you this excellent video from a young band that really packs a punch! We’re happy to hook you up with whatever you may need to get this video aired, including copies of their new Galvanized Souls EP. Please contact Andy Gesner and the HIP Video Promo crew at (732)-613-1779 or email us at info@HIPVideoPromo.com. You can also visit www.GalvanizedSouls.com for more info.