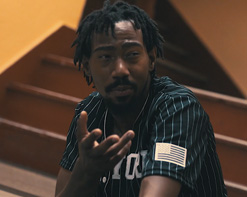 GV is a next-generation hip-hop artist with Brooklyn blood and the mind of a revolutionary. With a name like “GV”, meaning, “God’s Voice”, this man is on a mission to make a profound statement with his music. His most recent singles, “Exhale” and “Another Hit” seemed to come out of nowhere as a one-two punch, knocking people off their feet and putting GV on top. With a new eager fan base awaiting his next move, his brand new single, “Tunnelz”, along with its compelling, fully realized music video, is sure to be the song that breaks him through as the voice of change in Hip Hop.

Like many artists, GV was easily distracted in school, preferring activities like drawing and writing.  In fact, this is where he began writing poetry at a young age. After junior high school, he moved down South with his family, first to the suburbs of New Jersey, and then to the city of Tampa, Florida. Tampa proved to be integral to the mental and artistic growth of this gritty, no-holds-barred artist. He tried out college life down there, which was essential for him to learn exactly what he did NOT want to do with his life. His parents were completely unaware of his talents until he independently released the “Power of Now” music video, waking them up to the fact that their son had been mastering the trade of hip-hop right under their noses.

Fast forward to 2017 – GV’s heartfelt new single “Tunnelz” is his most personal effort to date. Written in the style of a confessional, this artist seamlessly weaves social issues and the day-to-day life of a starving artist into the fabric of the song. The instrumentals behind him showcase an old-school beat. A tight drum kit, surrounded by fluttering keys and a fat bass, is engulfed by the crackle of an old vinyl record, providing a profound nostalgia for the listener. The old school vibe juxtaposed with GV’s signature futuristic delivery makes for a truly memorable sonic landscape. Video production company, A1 Vision has become the visual keystone of “all things GV.”  This dream team have created a cinematic masterpiece to accompany “Tunnelz” with a visual that speaks directly to the zeitgeist gripping urban centers across the country. GV goes hard, spits a solid flow, his message is clear…. and he’s impossible not to root for.

We are absolutely ecstatic to be teaming up with such an inspirational new artist like GV to bring you the “Tunnelz” music video, and to see it included in your regular programming or on your online property would absolutely make our day! Don’t hesitate to let us know what we can do on our end to make that happen. Please contact Andy Gesner and the HIP Video Promo team at (732)-613-1779, email us at info@HIPVideoPromo.com for more info on GV.