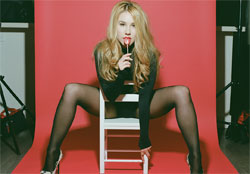 With her beguiling vocals and powerful delivery, Haley Reinhart brings both raw passion and soulful sincerity to all her musical output. A 27-year-old singer/songwriter with timeless sensibilities, she began honing her formidable vocal chops by singing with her parents’ band at age seven.

Reinhart has recently made her Concord Records debut on September 22, 2017 with What’s That Sound?, a classic rock album that blends rock & roll and pop with hints of jazz. Sound? is an ambitious and masterfully realized album combining original tracks with covers of iconic songs from the late 1960s. Reinhart wrapped up her first solo headlining international tour, visiting seven countries across Europe. Having completed her second solo headlining tour of the U.S. in November – December 2017, she is currently writing her 4th album.

“Last Kiss Goodbye”, her new single, is her own composition: a delightful, feather-light confection of jazz, bossa nova, and romantic American pop. Sound? is the work of an artist who has, at a still-young age, figured out exactly where she wants to go and just how to realize her vision – and “Last Kiss Goodbye” carries that confidence forward. Reinhart says, “I wrote & recorded ‘Last Kiss Goodbye’ sitting cross-legged on my living room floor, channeling the very essence of a timeless love. “I shot the video in Venice, CA at the canals as well as the beach. I adore these places as they truly radiate romance. I want you to get butterflies & feel as though you are watching an old film noir! This tune spilled out of me like a fine wine… And so, I hope it takes you wherever it is you wish to go!”

Reinhart’s ease with jazz – its whole history – has reinforced her singularity among modern pop singers. Her version of “Creep”, cut with Scott Bradlee’s erudite Postmodern Jukebox project, recast the Radiohead rocker as a smoky speakeasy ballad and stayed on the Billboard jazz chart for 58 straight weeks. Don’t bet against a similar outcome for “Last Kiss Goodbye”, which demonstrates the same familiarity with bossa nova and Brazilian jazz as the “Creep” cover did with torch songs and show tunes.

In the gauzy, pretty, beachside clip for “Goodbye”, Reinhart presents herself as a classic American beauty – the sort of screen presence designed to summon daydreams. She may have learned to approach the camera like that on Idol. More likely, she acquired the skill just as she did all of her others – through practice, diligence, enthusiasm, and close observation of beloved musical traditions.

Here at HIP Video Promo we’re profoundly thrilled to be working with Haley and her team to bring you this perfect visual for the upcoming warm weather! A former American Idol contestant (she came in third place on Season 10), she’s an artist that’s impossible not to root for and rest assured we’ll have plenty of outstanding Haley Reinhart merch to set up online/on-air contests and giveaways throughout the campaign, so don’t hesitate to let us know if you’d like to get your hands on some! For more info on Haley Reinhart please contact Andy Gesner and the HIP Video Promo team at (732)-613-1779 or email us at info@HIPVideoPromo.com. You can also visit www.HaleyReinhart.com or www.ConcordMusicGroup.com for more information on Haley Reinhart.