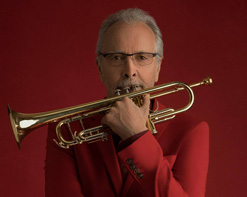 For more than sixty years, optimism has poured through Herb Alpert’s horn. There’s joy in his tone, hope in his phrasing, and exuberance in his sense of time. While he’s far too observant to miss any of the world’s troubles, he’s always believed that love and creativity would carry the day.  That’s the spirit that the Grammy Award-winning trumpeter, singer, and songwriter brought to the smash hit albums – five of which reached #1 – with the Tijuana Brass.  It’s the animating force behind Alpert’s work inside the industry as one of the founders of A&M Records, and it’s central to his mission with the Herb Alpert Foundation.

Considering his outlook, it’s a wonder that it took Alpert six decades to cut a version of the Louis Armstrong classic “What A Wonderful World”. (Granted, he was busy with a few other things.) Few songs encapsulate his outlook any better than this one does, and the 83-year-old Alpert offers it to an imperiled world as a gesture of reconciliation and generosity. There’s a practical application, too: all proceeds from the single will be dedicated to the Louis Armstrong Educational Foundation.

Alpert’s work has always existed at the crossroads of cultures – well before it was fashionable, he drew influence from Mexican, Caribbean, Brazilian, and European classical music, and introduced thousands of North Americans to sounds from tropical latitudes. Amazingly – but perhaps not surprisingly – all of that globetrotting is made manifest on “What A Wonderful World”. The song switches seamlessly from a reggae groove to a pure Latin rhythm and an orchestral break, and is decorated throughout by musical instruments from many traditions, including pipes, lutes, and, of course, Alpert’s own magical horn. The message is clear: it’s one globe, and the better we respect and listen to each other, the sweeter the harmonies we’ll make.

The clip for “What A Wonderful World” concludes with an image that’ll warm the heart of any fan of classic jazz: the young Alpert and Armstrong, together onstage with their tuxedos on and horns in hand, sharing a laugh. The archival feel of the clip is reinforced by the square frames and slightly overexposed edges; it really does look like an old filmstrip from the era of Tijuana Brass. Alpert has incorporated other images of peace in the video, too, including the silhouette of a growing tree against a bright orange sunrise, a mama polar bear trailed by her children, and kids at the microphone, singing their hearts out. Yet nothing carries the message better than the footage of the players, in the studio with their strings and horns and pipes, speaking to each other in the universal language of music.

Here at HIP, it’s a true honor and profound privilege to champion an iconic musical legend like Herb Alpert, and we’re stoked to share the “What A Wonderful World” clip with you and your viewers. For more than six decades, he’s been an artist that is impossible not to root for and we’re quite confident you’ll agree. Please don’t be shy about getting in touch to let us know what we can do on our end to get this video into your programming and rest assured we’ll have plenty of outstanding Herb Alpert merch to set up online/on-air contests and giveaways throughout the campaign. Please contact Andy Gesner and the HIP Video Promo team at (732)-613-1779, email us at info@HIPVideoPromo.com.