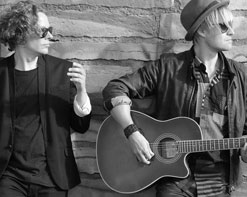 Ideomotor is an indiepop duo formed in 2014 hailing from Helsinki, Finland. Taking flavourful aspects of rock, pop, indie & electro -music, Ideomotor is pushing the boundaries of genres. Influences of 80’s synthpop, 90s rock and modern sounds translate into tunes that range from sweet melodic, to the dark & haunting corners of electro-infused pop and rock. Their new single for “The Gutter” is the perfect encapsulation of these influences and it is delivered in a stunning, minimalist video of beauty.

The idea of Ideomotor was a long time in the making as childhood friends Erkka and Kimmo had spoken often about a collaborative project. Their mutual interest in pushing the boundaries of standard guitar driven music into the electronic synth world kept the idea alive. When they finally linked up the ideas flowed naturally and abundantly, quickly culminating in their debut EP, For A Moment We Are Strangers. Songs like “Master/Slave” and “Good Life, Better Life” bring all of the intensity of classic albums such as NIN’s The Downward Spiral and Depeche Mode’s Violator. It is the first single, “The Gutter,” that shines the brightest, with a propulsive backbeat and soaring instrumentation that perfectly straddles the line between the analog and digital world.

“The Gutter” is a video that is dramatic in a simplistic and engaging way. The black and white video is anchored by shots of the group performing against a bare white back background. In between these shots is a story of a young woman in the darkness of the city nights. Her loneliness pushes her into the hands of an abusive relationship, which ultimately leaves her more isolated than she was before. The thousand yard stare in her eyes is very telling and the pain seething just beneath the surface is apparent. The performance of the female lead is impeccable and convincing, with an end result that is simultaneously fulfilled and empty.