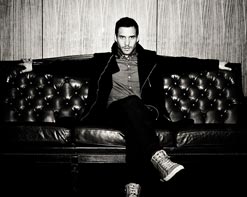 Iggy & The German Kids are a transatlantic collaboration yielding powerful pop perfection. Born of a chance encounter between NYC-based singer-songwriter Ignacio “Iggy” Uriarte and German production duo Hubertus Dahlem and Freddy Todenhofer, they began trading song ideas across a 4000-mile expanse, sharing vocal and instrumental tracks, and developing their sound. One of their earliest recordings, “So Hard”, peaked at number 70 on the German Top-100 Radio Charts and earned over 300,000 hits on YouTube. This summer, however, Iggy & The German Kids have upped the ante and dropped a new single so instantly infectious it will have you singing and clapping along by the second chorus. HIP Video Promo is proud to present the cinematic clip for “Mary Jane.”

On top of a head-nodding beat with a hip-hop bounce, the track wastes no time getting to the first of several pop-hooks, beginning with singer Iggy Uriarte’s playful melody over the verse, as he tells a tale of love’s sweet euphoria. It’s the chorus lyric, however, that perfectly captures the pull and power of Cupid’s arrow: “You can’t stop me / Yeah she’s got me / Twisted in the brain / She’s my Mary Jane.” With its production of horns, strings, keys, and layered background vocals, it’s easy to get swept up in the magic feeling the song so deftly creates. Their forthcoming full-length album can’t come fast enough!

The video–directed by Harris Hodovic–follows the beautiful Mary Jane and a crew of hip, attractive young friends as they enjoy a hot and hazy day in NYC with nothing to do except have a good time. Without a care in the world, they take in the city, riding the train around town, smoking, joking, lounging in the park, and generally doing whatever they want. Falling in love is always wonderful, but in this pure, carefree context, it’s especially magical. Throughout the video, the brilliant cinematography by Julian Holzwarth is as gorgeous as anything you’ll see on screen this summer, capturing the feel of the city, and even showcasing Iggy himself when he drops in on the action with a guitar in hand to sing the hooks.

For more information on Iggy and the German Kids and their spectacular new video for “Mary Jane”, please contact Andy Gesner at (732) 613-1779 or e-mail the HIP Video Promo staff at info@HIPVideoPromo.com .