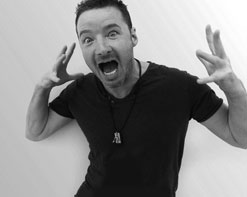 Perhaps more than any of his contemporaries in the world of EDM, Jack Eye Jones keenly understands the importance of dance music and what it means to his ever-growing audience. His unmatched passion for the genre and dedication to his fans is simply unparalleled. With calculated precision, the fast-rising LA-based Scottish producer masterfully creates vibes that instantly get our adrenaline moving and our blood pumping – converting even the stiffest among us into a full on booty shaker. Coming off the heels of last year’s breakout record, Summer Nights (released on his own IBZ Records), which spawned well-received singles, “Misbehavin’” (seen on mtvU – among numerous other accomplishments!) and “Forever Young,” Jack’s back in the spotlight with a remix of his beloved track “Fire In Your Soul” via house OG Todd Terry, and as expected, it does not disappoint.

One of Jack Eye Jones’ biggest breaks came when the legendary Tiësto remixed his track “Playground,” catapulting into the Beatport Top 10. He followed up with with “Far East,” which received early support from Avicii on his Le7els show and was accompanied by a killer remix from Mixmash and Revealed Records duo Blasterjaxx. On top of this he launched his own acclaimed monthly podcast called Ibiza Sessions as a way to take his message directly to his fans. The podcast has since topped the iTunes UK Chart on multiple occasions and has proven to be one of his most successful ways of connecting directly with his fans.

Turning it way up on the tremendous new remix, “Fire In Your Soul” features stunning, fire-hot production accompanied by an absolutely standout vocal performance by Glaswegian singer-songwriter Toni Etherson that has a way of penetrating the mind, body and spirit, straight up hypnotizing the listener. Like a much needed boost of caffeine, the new remix just makes you feel alive again. Helmed by director Harry Caulty the somewhat mysterious and totally captivating new video follows a group of friends roaming the streets as a dark force—the fire in the soul, presumably—begins taking over their bodies, turing them into unstoppable dance machines. It’s like The Exorcist for dance freaks and will undoubtedly satisfy Jack Eye Jones’ massive following!

HIP Video Promo is honored to once again be teaming up with the Jack Eye Jones crew to bring you this exceptional new video and remix. There are big things in store for Jack Eye Jones and we want you to come along for the ride! Please get in touch with Andy Gesner and the HIP Video Promo crew to let us know what we can do to help get this video into your programming. For more info please call (732)-613-1779 or email at info@HIPVideoPromo.com .