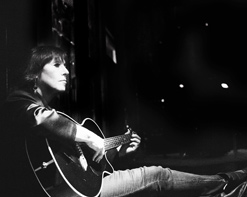 Janey Street is an American singer and songwriter born and raised in New York City. As an artist, she’s recorded several albums in her early career for Warner Brothers / Reprise, Capitol Records and also for Arista Records under the guidance of legendary music mogul Clive Davis. She’s spent many years on the road playing small clubs and 20,000-seat venues through out the US and Canada. She opened for the Bee Gees, Richie Havens, and John Hammond Jr., to name a few. Perhaps most well-known is her single “Under The Clock,” which was a Billboard Top 20 A/C hit, as well as receiving rotation on VH1.

Though her career started at a young age, she has never stopped her prolific output. Aside from being a solo artist, her songs have also been recorded by such artists as the famous blues singer Ruth Brown (on the Grammy-nominated CD, A Good Day for the Blues), Janis Ian (a track Street produced and also co-wrote with Ian), Eric Anderson, Dutch artist Judith (Holland), Japanese artist Maria, and others. On the screen her songs have been included in the animated picture Food Fight, and multiple tv shows like The Young and the Restless and One Life to Live.

Here in 2016 she has released her album, My Side of Paradise, on Blue Élan Records. Produced by Grammy-nominated producer Dave Darling, the album is a diverse collection of songs that showcase Janey’s timeless songwriting chops, her thoughtful, vulnerable lyrics, and of course an adventurous sort of production that is a contemporary nod to classic Americana Pop.

For the new video “(I’m Not) The Girl I Used To Know,” Janey takes an introspective look at herself and the many lessons she’s learned in her life. Seen through the eyes of Janey, inspired by a young girl outside the coffee shop where she sits, it’s a touching journey from past to present. A smattering of photos from the past several decades come across the screen in a collage while Janey and her band perform for an eager crowd. Returning to the scene at the coffee shop, Janey comes outside to find the young girl sharing a tender moment with Janey’s loving dog. Though their exchange is brief, Janey sees a little bit of herself in the child, knowing that as long as the journey has been, the best days are still ahead of her.

A big big thanks to the Blue Élan Records team for continuing to bring us some of the most exciting artists on the 2016 musical landscape. We would love to hook you up with copies of My Side of Paradise, or anything else we could do to help get this video into your programming. You can contact Andy Gesner and the HIP Video Promo staff at (732)-613-1779 or email us at info@HIPVideoPromo.com. You can also visit www.JaneyStreet.com or www.BlueElan.com for more info on Janey Street.