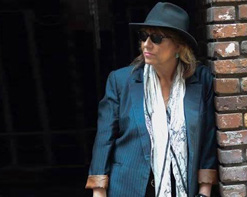 Janey Street is a Nashville-based singer/songwriter with a heart of gold and the voice to match. With a lifetime of experiencing the highest of highs and the lowest of lows in the turbulent music industry of the 21st century, she has lived to tell her story one song at a time. Her thought-provoking new single, “Undone” seeks to answer questions that burden us all about the self and the world around us.

Janey Street was born and raised in New York City. In her early career, she recorded several albums for the likes of Warner Brothers/Reprise Records, Capitol Records, and Arista Records under the guidance of legendary music mogul, Clive Davis. In this time she saw big league success. Her single, “Under The Clock” was a Billboard Top 20 hit, and the accompanying music video saw frequent airplay by VH1. Street spent years on the road traversing the club scene of the US and Canada opening for all-star acts like The Bee Gees, John Hammond Jr., and Richie Havens just to name a few. However impressive, Street’s colorful resume doesn’t end at recording and performing. She has written songs for such diverse artists as Grammy-nominated, Ruth Brown, Dutch artist, Judith, and Japanese artist, Maria, among many others. She also has a new single “Sure Can Use Some Christmas Around Here” on the upcoming Alabama Christmas record American Christmas. To top it all off, Hollywood has been receptive to her work in both TV and Film (two of Street’s songs were featured in animated film, Foodfight (2013) starring Hillary Duff and Eva Longoria). Since her stint with the majors and the classic move to California that comes with it, Street has since moved to Music City, Nashville, TN to continue her career on her own terms.

“Undone” is Janey Street’s newest single off the album In My Own Skin, released in June 2017 on Blue Élan Records. The music video opens up with Street’s hometown of Manhattan, NY. Raw shots of city life and iconic skyscrapers give a taste of the city as it truly is. The video hits several iconic locations like the Brooklyn Bridge, Times Square, and Ground Zero to show viewers that even amongst the millions of people that travel the city streets, it’s still possible to feel alone. Street’s lyrics ask deep questions like, “Is it me or the world that seems to be unraveling?/Is it time that naturally is travelling? Is it in my head or outside that’s falling apart at the seams?/Is it real or is it just in all my crazy dreams?” “Undone” entices fans to delve deeper into the veteran songstress’ journey as she continues to craft world-class hits for her vast demographic to enjoy.

Here at HIP it’s our profound pleasure and privilege to be teaming up with such a veteran of the industry like Janey Street to bring you the “Undone” music video and see it included in your regular programming would absolutely be the best holiday gift imaginable. Don’t hesitate to let us know what we can do on our end to make that happen. Please contact Andy Gesner and the HIP Video  Promo team at (732)-613-1779, email us at info@HIPVideoPromo.com or visit www.JaneyStreet.com for more info on Janey Street.

For info about other Janey Street music videos, click HERE