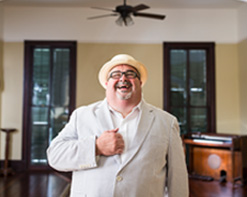 New Orleans-born John “Papa” Gros (pronounced “grow”) has spent more than a quarter of a century behind the piano backing the music of the “Big Easy.” His latest hit “Cocaine and Chicken Fricassee” is a track that blends the raw and hardcore sounds of Rock & Roll, the fun, dance-infused sound of Funk and roots-y Americana into a shape shifting gumbo that carries on the tradition of New Orleans, both honoring its past and helping to shape its future. He’s been a sideman. A bandleader. A front man. A solo artist. A singer. An instrumentalist; the roles have been varied, but the goal remains the same: to honor the music he’s been living his whole life, and to add his own page to New Orleans’ history book.

After beginning his career as an organist and pianist, for George Porter Jr.’s Runnin’ Pardners, during the 90s, Gros formed the funk group Papa Grows Funk in 2000. Inspired by his hometown hero and longtime colleague Allen Toussaint, who passed away while Gros was recording the album, River’s on Fire is John’s first musical release since his former band, Papa Grows Funk, disbanded in 2013. Gros led the charge as the group’s front man, songwriter and organ player. The quintet held down a weekly position for more than a decade at the renowned Maple Leaf Bar in New Orleans. Incorporating the suave sophistication of a jazz quintet with the avant-garde, “anything-goes” spirit of Mardi Gras, Papa Grows Funk released six critically-acclaimed albums, including “Needle in the Groove,” which was co-produced by Toussaint.

After the band parted, John landed work as a sideman for many NOLA artists including, Better Than Ezra, Anders Osborne, The Metermen, Raw Oyster Cult, and Bonerama. Finally, John centered his focus once again on his solo career, which he’d started in 2004 with the album “Day’s End.” Working with top-shelf collaborators like Grammy Award-winning co-producer Tracey Freeman (Harry Connick Jr.), Grammy Award-winning mixer Trina Shoemaker (Sheryl Crow) and guitarist Brian Stoltz (Bob Dylan), John’s third album, River’s On Fire catches John showcasing his talent on the keys, furthering his well-deserved standing as one of New Orleans’ most notable songwriters. John “Papa” Gros is also a winner of OffBeat Magazine’s Best of the Beat Award for Best Pianist/Keyboardist.

“Cocaine and Chicken Fricassee” collects narratives from Papa Grows Funk’s long-running Monday night residency at the Maple Leaf. John offers that the song is “13 years of Monday nights rolled into one song; the good, the bad, the ugly.” This notion is represented perfectly in this newly released video. Capturing the visual essence of funk music, this video takes place in the bar, groups of people having nothing but a good time as John “Papa” Gros takes turns observing all the happenings around him. Cutting to John and his band, viewers will be mesmerized by John’s piano skills and the lively, cool nature of his band. This is surely a video audiophiles and music lovers all over will not want to miss.

We’re very excited to be working in tandem with John “Papa” Gros to bring you this most excellent clip. Please let us know what you need to get this video into your programming by calling Andy Gesner and the HIP Video Promo team at (732)-613-1779, email us at info@HIPVideoPromo.com.