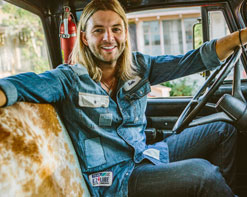 The brand new music video is by Irish singer/songwriter Keith Harkin. He’s a total road warrior, having toured and built followings in the UK, Canada, Australia and of course the states. He gained recognition from Grammy Award-winning Producer, David Foster, who ultimately signed him to Verve Records. Keith released his first solo debut album with Foster and Verve Records, where they watched it soar to the number 1 spot on the Billboard charts.

Since his first solo release, Keith has been writing all of his own material for his highly anticipated, second album On Mercy Street. For this deeper, more personal direction, longtime friends and talented producers Andy Wright and Gavin Goldberg took this album under their wings as if it were their own. Keith’s love for the classics (Don Henley, Glen Campbell, Tom Waits, Neil Young & Van Morrison show – to name a few) are reflected in his collection of folk-infused, acoustic pop sounds. Combined with his honey-thick voice and a full live band, Keith takes you on journey that creeps into his heart strings.

“Mercy” is a video that captures the essence of Keith Harkin in an energetic behind the scenes look at his life on the road. Every aspect of the day to day grind is covered, from the long drives, the unloading, the downtime, and most importantly, the live show! The enthusiasm of Keith and his band is apparent from the get go. Not only does this group have an organic, healthy dynamic onstage, but you can tell that they genuinely enjoy each other’s company as well. It’s easy to see why Keith Harkin has become such a beloved road warrior, he was born for it!

While working on his solo career, Keith also has continued to perform as a lead soloist in Celtic Thunder. His role in Celtic Thunder has brought him to write and record a number of his own songs for the show, as well as, perform for a vast audience Worldwide, including President Obama and the first Lady and recording numerous PBS specials.

We’re very excited to be a part of the Keith Harkin team and can’t wait to share this video with you! Huge thanks to the Blue Elan Records team for all of their hard work. Please take a look and let us know if there is anything we can do on our end to help get this into your programming. You can contact Andy Gesner and the HIP Video Promo staff at (732)-613-1779 or email us at info@HIPVideoPromo.com . You can also visit http://www.KeithHarkin.com/ and http://www.BlueElan.com/.