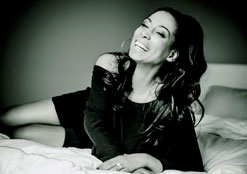 Do you believe in the Vodou spirits? Let Malou Beauvoir’s ecstatic video for “Rasenbleman” do its work on you, and by the time you’re done watching, you just might. The Haitian-American artist may just be in touch with some supernatural forces. Then again, she’s such a sensational musical talent that she might not need to be. Beauvoir and guest singer Paul Beaubrun are electrifying singers, and when they raise their voices together, they shake the sky.

Seen from one perspective, a “rasenbleman”, or a rassemblement, is a kind of a party: a religious celebration for Haitians and an opportunity to connect with the land, the spirits, and each other. But there’s an unmistakable political implication to the word, too. The rasenbleman Malou Beauvoir is hosting here is more than just simple assertion of cultural identity. It’s a literal raising of ancestral spirits – communion with the victims of slavery and oppression who haunt the imaginations of people far beyond the geographical confines of Haiti. In the song, Beauvoir and Beaubrun ask for unity with all of those who’ve suffered from the effects of colonialism. “Rasenbleman” is a passionate entreaty to stop the violence, and answer oppression with justice.

“Rasenbleman” was originally penned by Toto Bissainthe, a groundbreaking figure in the history of Caribbean music whose work isn’t as well known in North America as it ought to be. Bissainthe, who was born in 1934, drew deeply on the traditions of Vodou in her writing, and crafted songs that spoke to the universal human condition. She included her version of “Rasenbleman” on the 1989 collection Chante Haiti, an album made at the end of a long exile from her homeland. Much like Bissainthe, Malou Beauvoir is an artist with roots in the Caribbean and in North America, and who simultaneously serves as an ambassador for Haitian culture and as an activist, devoted to the cause of raising consciousness.

The clip for “Rasenbleman” showcases both sides of Beauvoir’s artistic personality. It is welcoming and joyous, but it contains a powerful message, too. Director Hugue-Robert Marsan shows us Haiti at its most beautiful; he also shows us the souls of the Black Maroons who fought against the slavemasters in the Haitian Revolution. The clip was shot at Lakou Bovwa, also known as the Peristyle de Mariani, a beautiful and mystique-drenched Vodou temple south of Port-Au-Prince. Vodou leader Augustin St. Clou appears in the clip alongside Beauvoir and Beaubrun. They’re all present at the rasenbleman, celebrating their heritage, standing together, demanding change.

Here at HIP Video Promo we’re beyond elated to team up with Malou Beauvoir to share the “Rasenbleman” video with the world! We’d be thrilled to see this video added to your cherished programming and online presentations in a timely fashion, so please don’t hesitate to check it out Rest assured we’ll have plenty of Malou Beauvoir merch available for on-air contests and giveaways, so if you’d like us to send you some, all you need to do is reach out. For more information on Malou Beauvoir please contact Andy Gesner and the HIP Video Promo team at (732)-613-1779 or email us at info@HIPVideoPromo.com. You can also check out www.MalouBeauvoir.com for more info!