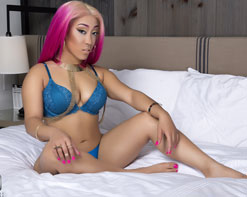 Miami Tip, aka Tip Drill, is one of the hardest working and genuine success stories we’ve been privy to work with. From her humble beginnings in Long Island, New York, this creative spirit transplanted herself to sunny Miami where she completely embraced the superstar persona we know today. In her new video “LOW KEY,” which features the one and only Fetty Wap, she shows that her appeal stems from much more than just her dynamic physical presence. Rather, she is beloved for the undeniable talents she possesses and the big, lovable personality she exudes.

Miami Tip has built up a legion of followers begging for more from the up-and-coming rapper/author. With a braggadocios sound mixed with a feminine sass, her sound has already intrigued industry veterans. While many used to pay attention to her dancing skills, people are increasingly paying attention to her words, as she proves that she is talented beyond the pole. Having been seen in videos from industry favorites like Plies, French Montana, J. Cole and Nicki Minaj and heard on the same records as Trina , Gunplay, Brisco, Ace Hood and Sam Sneak, one could say that Miami Tip has her fans by the eyes and the ears.

In the “LOW KEY” video, Tip may be in a little bit of hot water with the law, but that doesn’t stop her from being a total boss. As she gets shaken down behind bars she quickly establishes her dominance as the queen of this castle. The detectives think she’s covering for her man, Fetty Wap, and the other inmates have their own plans for her while she reminisces about life on the outside. Fear not, however, there’s no way she’s going up the river, she’s too slick and too irresistible to not be sprung!

We’re super psyched to be a part of the Miami Tip team, and can’t wait to see viewers and programmers alike swarm to this super wild clip! Please don’t hesitate to get in touch with Andy Gesner and the HIP Video Promo team at info@HIPVideoPromo.com . You can also visit  and for more info.