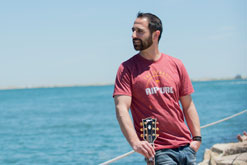 My Silent Bravery is not afraid to speak up. Displaying immense courage, Matthew Wade puts his soul on display to spread a message of eternal optimism in the face of disaster and even peace. Following a sports injury, he decided to follow the path of music and My Silent Bravery was born, with the goal to spread his inspirational message through acoustic pop-rock music. He universally connects to his fans by unraveling the quiet things that no one ever brings to light. Gleaming through colorful imagery, surf rock, pop and languid guitar riffs he has found his higher calling as the shining force in the independent scene.

My Silent Bravery might be an independent artist, but he still has managed to make his presence on the charts felt. He has released a plethora of projects starting in 2007 including Uncharted Territory, Are You Prepared?, Can’t Quit, Diamond from Coal, and Breakthrough. Over the years he has partnered up with Award-winning producers like Mike Mangini, Peter Zizzo, Anthony Resta, Warren Huart and now Jim McGorman on his latest project Willing to Try. Willing to Try, Chapter 1, landed three songson the Billboard charts with each song hitting multiple charts. His last single ’18’ peaked at #8 Digital Rock Song Sales, #28 Hot Rock Songs Chart, and #46 on Emerging Artist chart. He has also trended overseas on YouTube and charted on the top 40 of the iTunes Singer/Songwriter Best-Sellers chart and Amazon’s Hot New Releases, while managing to remain victorious in a number of music award competitions.

By cultivating, creating and reflecting he has molded the perfect story of persistence, perseverance and inner strength to introduce us to new sound bound to leave one speechless. His recent video for “Everyday is The Weekend” opens the curtain to his best and most lethal strengths. Directed by Ben Mortemayor, the video takes place in an office setting as a coworker takes casual Friday to the next level by exuberating her contagious dance moves. At first apprehensive, the office learns to practice mindfulness in the form of dance instead of a breakdown. As positivity pervades the office, the light grows at the end of the tunnel. It is charming traits like these that highlight My Silent Bravery’s journey to enlightenment as an entertainer and teacher.