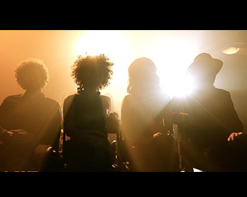 The Nervous Wreckords was born in October 2009 with “a collection of high- energy songs that infuse danceable beats with rocking glam guitar riffs and catchy melodically infectious songs.” Brian Karscig had released three albums, four EPs, and experienced five years of extensive international touring with the band LOUIS XIV when he met Anthony Saffery, producer and member of the UK band Cornershop, in 2008 in a hotel bar in Cambridge, MA while touring with LOUIS XIV. One year later, Brian took five songs that he had been working on that were to be included on an upcoming EP called The Nervous Record and flew to Cambridge where he mixed and recorded at the famous Camp Studios with Saffery, and so it began. After being questioned by The Killers about having a band, Karscig made a few telephone calls and that’s how Lindsay Matheson and Daniel Schraer joined The Nervous Wreckords. The band quickly rehearsed and in no time played their first fifteen shows opening up for The Killers.

The Nervous Record soon became THE NAILBIGHTER EP, and the name of the band became The Nervous Wreckords. By the end of 2010, the band had released their first full-length album VALUMINIUM, which ended up being more of a collection of home demos Karscig wanted to release before the band became the force that it has currently become as a live band. This gave The Nervous Wreckords a platform to open
shows for acts such as Brandon Flowers and Cee Lo Green in 2011. Songs from the album have been featured in commercials for Charlotte Russe and Victoria’s Secret, music station placement on Virgin America and Delta Airlines, television series such as MTV’s The Buried Life, and for the movie trailer for a film called Little Blue Pill. Here with their new single are The Nervous Wreckords with their undeniably exceptional video clip for “Let Them All Talk.”

The clip highlights the magnitude of The Nervous Wreckords’ performing skills and “Let Them All Talk” introduces contemporary music fans to the high energy and full-of-life pace that this band brings. Directed by Ryan Fitzgerald, the clip portrays images of a beautiful young woman being sidetracked by jealousy, and as make-up artists begin to color her face, she pushes them away realizing that the “talk” of every one amounts to nothing. “Let Them All Talk” shows how eager and up to date these artists are, and as they rock through each verse and the catchy chorus, we get a glimpse into the style and demeanor of The Nervous Wreckords. Full of rocking guitar riffs and energetic drums, “Let Them All Talk” is an introduction to a band that will soon be all over the place!

The Nervous Wreckords have already made a name for themselves, but the quality of the clip for “Let Them All Talk” is sure to excite and inspire even more music lovers. For more information on this exciting new band, please contact Andy Gesner and the HIP Video Promo staff at (732)-613-1779 or email us at info@HIPVideoPromo.com .