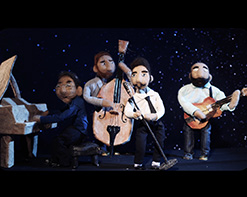 Ori Dagan is a world-class jazz singer-songwriter who wields mass critical acclaim for his work. His arrangements span from reimagined infectious pop classics to jazz originals that push the boundaries of sound, while still paying homage to the founders of the genre. His newest single, “Sting of the Cactus” is a scat-filled confessional about the life of a musician, where his honesty pours out lyrically and instrumentally for an inside look into his life.

Israeli-born and Toronto-raised, Ori Dagan was born to swing, scat, croon, and entertain. Initially trained as a classical pianist, he earned a Bachelor’s degree in Fine Arts from York University with a focus on Jazz and Classical vocal studies. Following his time at York U, he continued his music education at Humber College, honing in on performance, songwriting, and improvisation. These years of education proved their worth when Dagan began receiving widespread acclaim for his work, including “Best Jazz Vocals” at the 2015 Toronto Independent Music Awards and “Best Male Vocal” in NOW Magazine’s Reader’s Poll against the likes of The Weeknd, Bahamas and Peter Katz.

In January 2016, Ori Dagan released “Clap on the 2 and 4” as a single with a hilariously bubbly music video. This video opened up new doors to higher ground for this artist, being awarded for “Best Educational Jazz Short” by New York Jazz Film Festival, “Best Music Video” by Open World Toronto Film Festival and “Best Male Vocalist” Bronze by Global Music Awards, just to name a few. With all the recognition in the world under his belt, Dagan has returned to release his best work yet to a much broader audience.

His new song, “Sting of the Cactus” is one of 5 original tunes included in Nathaniel: A Tribute To Nat King Cole, which has just been awarded the Silver Medal for “Best Album” at the Global Music Awards. In a move as bold as Ori’s singing, each of the 12 songs on this release is accompanied by a music video, making it the first visual album in the jazz genre. The visual album was made possible thanks to a successful Pledge Music campaign with over 200 backers worldwide. Directed and designed by Bekky O’Neil, the music video for “Sting of the Cactus” is an animated short where Dagan is the main character in puppet-form. He sings on the corner of King Street all day and night. He then joins his band while the stars are still up, constantly working on his craft, repeating the lines “Do it, do it, do it, and then do it again,” as he flows in and out of scat. The lyrical content of the tune is brutally honest about the life of a musician with lyrics like, “Being a musician is absurd,” and “Some people make millions, others zip.” This sort of honesty is his incredible way of connecting with audiences without even trying. Speaking of his day-to-day life is inviting fans to an inside look into the life of Ori Dagan.

We are absolutely ecstatic to be teaming up with Ori Dagan to bring you the”Sting of the Cactus” music video, and see it included in your regular programming. Don’t hesitate to let us know what we can do on our end to make that happen. Please contact Andy Gesner and the HIP Video Promo team at (732)-613-1779, email us at info@HIPVideoPromo.com or visit www.OriDagan.com for more info on Ori Dagan.

For info about other Ori Dagan music videos, click HERE