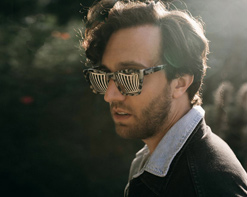 Rising out of the Silverlake scene of Los Angeles, Paper Pilots has consistently proven to be a gem with local radio and press, receiving support at KCRW, KCSN, ALT 98.7, and the legendary KROQ. Even more impressive is their extensive placements in HBO’s True Blood series. The band, led by Justin Bocchieri, scored a spot on the Grammy nominated True Blood Vol. 3 soundtrack with their cover of The Zombies’ “She’s Not There.” On top of that, the band even appeared in True Blood’s Season 6 finale to perform three songs, “Lacksadaiscal”, “Romancing Glances” and “Balancing the Backlight”, all from their self-titled debut EP.

Their “California Brit-Pop” sound has served them very well, but for their newest single, “The Weather,” Bocchieri & co. have decided to explore their moodier side. Produced by Grammy Nominated engineer/producer, Luke Tozour (Katy Perry, Adam Lambert, Jamie Cullum) and mixed by Grammy Award winning engineer, Paul Hicks, (Coldplay, Elliot Smith, Paul McCartney), it displays flashes of rock ‘n’ roll guitars and foggy piano, allowing listeners to feel the change of seasons through the slow build of the track. For the accompanying visual, Paper Pilots have found the perfect compliment to this simmering, ethereal tune.

“The Weather” is the type of music video that proves that a simple concept can sometimes be the best approach with the right resources. On paper the video is essentially just three and a half minutes of Justin Bocchieri singing in a manipulated speed in a darkened room. The black and white piece keeps a chill vibe from beginning to end, but as it progresses director Joel Knoernschild introduces minimalist visuals that enhance the clip from performance video to a piece of art. Bocchieri’s face is subtly manipulated into various shapes and geometric lines carve up the screen into smaller tales. As the lines snake across the screen in fashion reminiscent of early video games the panels are filled in with striking footage of clouds, smoke, and rain. The relaxing vibe is never disturbed, but the emotions connect on an incredibly visceral level.

Here at HIP Video Promo, we are all incredibly excited to have been introduced to such a mighty talent like Paper Pilots. We hope this video is fast-tracked into your programming, so please don’t hesitate to get in touch to let us know what we can do to make that happen. Please contact Andy Gesner and the HIP Video Promo staff at (732)-613-1779 or email info@HIPVideoPromo.com. You can also visit www.PaperPilotsMusic.com for more info on Paper Pilots.