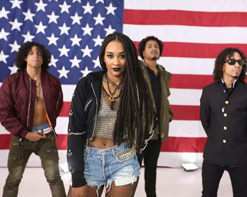 It’s been a frigthful time in America. No matter how apolitical you felt you were a few years ago, chances are, you’ve been tugged into the fight. It’s been country versus city, nativists against multiculturalists, the wealthy against the poor. Often it’s felt like the government is at war with its own people. Quantum Split, a fiery rock group from New York City, isn’t here to sugarcoat any of that. That isn’t their style. Instead, their debut music video is a vicious kick at a system that only seems to be working for the powerful – and one run by people who aren’t even bothering to disguise their prejudices anymore.

“America”, a ferocious debut single, is the new band’s first handshake with the nation. But here in the New York metro, Quantum Split has built a passionate following in a very short time. Their ascent has been driven by their sound: rough, direct and economical, uncompromising, funky when necessary, invariably soulful, and sometimes downright mesmerizing in its intensity. Soleil Laurent is a powerhouse vocalist and charismatic frontwoman, dexterous guitarist Adrian Read skillfully draws from hard rock, anthemic folk, and punk, drummer Anthony Anderson hits the skins with metal intensity, and bassist Ivan Hardy provides the steel framework that allows the songs to soar. Theirs is a project built to move crowds, and just last month, Quantum Split headlined at Irving Plaza – a remarkable achievement for any independent band, let alone one so new and fresh.

Laurent’s lyrics are always forthright. On “America”, she applies her emotional conviction to our current national crisis. “America” serves notice that ordinary citizens will not be divided by race or creed – and that true patriotism means standing up to injustice. Director Cortez McKay, along with producer Richard Laurent, have matched this sentiment with a video that reinforces its urgency – a protest in film, a plea for unity, and a challenge to the status quo.

He also captures Quantum Split in full, kinetic live action. Their chemistry is evident, and their performance is magnetic. But the most striking images in the clip don’t contain the bandmembers at all. Instead, McKay shows marches, mass actions, protesters tussling over a Confederate battle flag, and footage of brutal, armed security personnel taken from surveillance cameras. The video namechecks Sandra Bland, the black woman whose 2015 death in custody is still a cause of great controversy, Sean Bell, who was killed by police on the night before his wedding, and Harriet Beecher Stowe, abolitionist and author of Uncle Tom’s Cabin. Stormtroopers with masks and helmets paint black bodies white and vice versa. It’s harrowing, and it does indeed reflect our current turmoil. But none of it breaks the spirit of the many proud Americans who stand together and face McKay’s camera in defiance. No matter how bad things get, the Quantum Split message is an inspiring one.

We’re certain Quantum Split is going to explode in 2017 and we want to get you in on this rollicking train while the getting’s good, so please let us know what we can do to lock in your support! Please contact Andy Gesner and the HIP Video Promo staff at (732)-613-1779, email us at info@HIPVideoPromo.com.