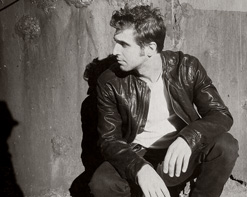 There are singers who carry experience in their voices; they approach the microphone with the authority bestowed by the passage of time and the tribulations of life. While still a relatively young man, Radiator King’s personal story is no simple one, and he’s brought those complexities to bear on his ambitious and emotionally candid music.

The story of Radiator King begins in 2011 when Adam Silvestri was a young buck in the world of hardcore punk. Hailing from Boston, Massachusetts, he grew up watching legendary underground acts like Bane and Have Heart alter the way people think through their music. It’s the kind of impact that gets engraved in one’s brain. In his latest single, “The Guns You Pawned,” this impact continues to shine through his own music while bringing a whole new sonic approach to the table.

For many people involved in the punk scene, there comes a time when people grow up and “retire” from punk. Radiator King is a musical endeavor that has graduated from the scene with the ability to utilize the DIY work ethic in the context of his Americana musical mosaic. With six separate tours spanning from the East to West Coast in 2013 and 2014 alone, Radiator King has played everywhere from basements and bars to art galleries and cafes. After his 2015 album, Document Untold, another six-week tour continued his well-documented journeys from Coast to Coast.

Fast forward to 2017, Radiator King resides in Brooklyn, NY and has released his third studio album, A Hollow Triumph After All, followed by yet another cross-country tour. The album “is a sacred and profound attempt to transcend pain, loss and suffering by celebrating a life well-lived, while at once acknowledging the darkly tragicomic catch 22 of existence—that we’re born to die.” A sonic lovechild of punk and blues, these themes are translated with the most honest of expressions. “The Guns You Pawned” shines the spotlight on this concept, and the music video is a flawless representation of just that. His all-American working class style, mixed with his rugged voice, presents an authenticity of hardship and brings chills of familiarity down the spines of his fast growing fan base.

It’s a true honor and profound privilege to advocate and fight the good fight on behalf of Radiator King and we’re ecstatic to share this compelling video with you and your viewers. He is a very special artist that has captivated us here at HIP HQ and one that is impossible not to root for. Please don’t be shy about getting in touch to let us know what we can do on our end to get this video into your programming and rest assured we’ll have plenty of outstanding Radiator King merch to set up online/on-air contests and giveaways throughout the campaign.. Please contact Andy Gesner and the HIP Video Promo team at (732)-613-1779, email us at info@HIPVideoPromo.com or visit www.RadiatorKingMusic.com for more info on Radiator King.