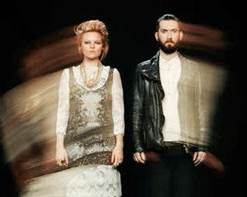 Toby Butler and Liela Moss of The Duke Spirit teamed up and branched out with their spectacular new side project, Roman Remains. HIP Video Promo is pleased to introduce a sythn-punk tune that captures a whole new revolution of contemporary music, “This Stone is Starting to Bleed.”

For the past decade, Moss and Butler played together in the British rock group The Duke Spirit. The duo’s debut EP Energy You was just released on H.O.T. Records and has received much critical acclaim. Liela’s brazen style has created a certain ambiance that is so contagious that you won’t be able to look away. The full-length album hits the streets on March 4th 2014!

“This Stone is Starting to Bleed,” which Rolling Stone calls “a glitchy, blistering synth-punk cut” is full of high energy and unique scenery. Directed by the band’s close friend Marcus McSweeney, scenes were filmed on the Southeast English coast. “Our psychedelic shaman,” Butler explains, “weaves his magic in the fire, whilst we lurk, waiting.” This dark video clip displays the act of worship and spirituality, all intertwined into one of the most visually stimulating and intricate pieces of cinema we’ve seen in quite some time. The clip is somewhat nightmarish, but all the more, feelings of adventure linger and will leave you wanting more. You won’t want to miss this video!

We are very hopeful that you will embrace this video like we have, so please don’t hesitate to be in touch if there is anything we can do at all to help this video get into your programming. For more information on Roman Remains and their new clip “This Stone is Starting to Bleed,” please contact Andy Gesner and the HIP Video Promo staff at (732)-613-1779 or email us at info@HIPVideoPromo.com . You can also visit www.Facebook.com/RomanRemains/ for more info.