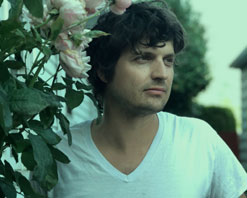 Ryan Rebo is everything you loved about the rise of 2012 indie music culture with a contemporary electric guitar killer kick. Previously performing under the name Man At War, he is now ready to take back his own name. As he makes his way back to the spotlight, he shall be welcomed in a new light. Rebo is coming back a little bit shinier by smoothing out his rough indie, DIY edges. With less acoustic guitars and more focus on vocal melodies and performance, he has evolved his sound to be less familiar and folky, catapulting a new wave to dive into the renovated Ryan Rebo.

Ryan Rebo has been pulling from various musical genres and stylings his entire life. He grew up in Seattle and moved to Montana at age ten where he found comfort in nature, inspiring him to branch out of his own scenery. He picked up the guitar and the rest was history, as he started songwriting at the age of sixteen. He began sharing his music on Myspace, where he reached a wide audience at a time where the internet was just starting to blossom. Always a traveler, Rebo has been in multiple bands and produced a plethora of projects. After releasing two EPs with his band Broadband Shortwave as a teenager, he released his debut album Dizzy American in 2009, an EP, The Lonely Scientist, back in 2010, and the album Western Dreams of Things Unseen in 2012. No longer releasing music under Man At War, he is riding into battle for his next project quite confidently, with the new album 7 Songs In The Key of Z expected to be released next spring.

Produced by Graham Barton, Ryan Rebo’s latest effort is entitled “Boogieman” and it’s the pinnacle of all his years of experience and creative insight. Directed by Dead Dinosaur Productions, the video opens up as he is washing his face, which is put to a halt once he catches his glare in his reflection. Otherworldly creatures chase him throughout the video, turning at every corner as his paranoia and discomfort grow throughout the day. Playing with themes of escapism and mental illness, the video certainly does feel like a sick trip as he desperately tries to make it through the day despite mysterious figures in masks haunting him. Giving a compelling visual representation of what it means to suffer from an anxiety and panic disorder, his symptoms are also shown when he is surrounded by people he cares about- ruining the celebration for himself. The video then comes full circle back to the mirror as he observes that he has been running from himself the whole time.

It’s an absolute pleasure to team up with Ryan Rebo to share the “Boogieman” music video with the world! It’s our hope that you embrace this clip as much as we have and add it to your beloved programming and online presentations. For more information on Ryan Rebo, please contact Andy Gesner and the HIP Video Promo team at (732)-613-1779 or email us at info@HIPVideoPromo.com. For recent updates on Ryan Rebo check out www.Facebook.com/RyanReboMusic.