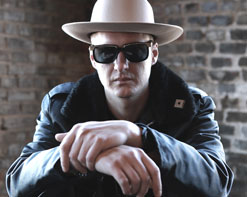 Known for an energetic and inspired performance, veteran emcee Scrub has provided opening support for JC Brooks and the Uptown Sound, Macy Gray, Nappy Roots, Blueprint, Louis Logic, Big Chief and many more. Now the St. Louis native has teamed up with LA-based producer Ace Ha to create a classic that showcases their collective experience.

Their debut, self-titled album brings in elements of golden-era Boom Bap weaved seamlessly with progressive sounds and intricate lyrics. Ranging from lighthearted story telling to biting social critiques, these two artists deliver a listening experience that is both engaging and heartfelt. They deliver a real banger right out of the gate with their brand new single and video for “Anita Ride!”

Take the brand spanking new Musial Bridge out of St. Louis into Illinois and you’ll find yourself in the town of East St. Louis. You know what, scratch that, take the McKinley Bridge, because the derelict condition will better to prepare you for the scrappy, hardscrabble town of East St. Louis! It might not be much to look at, but it’s about as real as it gets. This is probably why Scrub and Ace Ha chose to shoot the dope new “Anita Ride” video there.

The video follows the trials and tribulations of used car ownership as it follows Scrub nursing his old ride across town, literally taping it up along the way. Of course, this ’96 Cutlass Ciera eventually needs more than just duct tape. Fortunately for Scrub, his crew is never far away, and another ride is just around the corner. There may be some hurdles, but hey, no car payments!

The video is the perfect blend of urban grit, laid back fun and excitement, and an explosive artistic spirit found in the top notch song delivery along with the tasty graffiti lining the abandoned factories. It’s wild ride! Well, at least until the Oldsmobile dies again…

We’re so excited to be a part of this team to bring you a bombastic clip that is just a sweet taste of things to come! If you’d like to learn more about Scrub and Ace Ha please don’t hesitate to be in touch with Andy Gesner and the HIP Video Promo team at (732)-613-1779 or email us at info@HIPVideoPromo.com . You can also contact Jorge@IATArtist.Management.