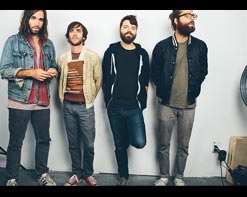 With a dreamy, indie pop sound over a buoyant dance beat, “Floodlights” is at once understated and lush, modest and triumphant. It’s a rare and wonderful effect. Organ tones swell beneath layers of guitar, and the drums drive the song’s steadily pulsing heartbeat, but even at its most climactic, the dynamic sits neatly beneath Williams’ calmly confident vocals. “Don’t you wanna think this is our time?” he sings with the sincere and profound hope of someone who has found the love of his life. (Side note: Williams recently married his! Congrats!) In the chorus, he simply repeats a single line in a lovely falsetto, “This love is gonna grow.” Regardless of your romantic status, your love for the sound of Soft Swells will follow suit.

The gorgeous clip contrasts shots of the band in a darkened, rooftop performance, with footage of an attractive young couple dressed in muted pastels as they frolic together, consumed by love’s reckless abandon. The video first finds them on the beach at sunset, capturing their embrace by the fading light. But after nightfall, a mysterious spotlight emerges from the sky and reveals them making out in the sand. They quickly get up and run away to escape it.

Finding their way onto a train, they seem invigorated, in love, and unfazed by whatever is looking for them. When they emerge from the station, however, they begin running through the city streets, as the spotlights in the sky continue their search. The lights begin to close in on them, and they make their way to the rooftop where the Soft Swells have been playing. The couple bring their own light and color to the band as they run by. With nowhere left to go, they look at each other, smile, and hold hands as they jump together, committed to the end.

For more information on Soft Swells, and their new album and video, please contact Andy Gesner or Rob Fitzgerald at (732) 613-1779, or e-mail the HIP Video Promo staff at info@HIPVideoPromo.com . You can also visit www.SoftSwells.com for more info on Soft Swells.