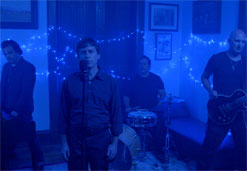 Philadelphia-based rock band SPiN have established themselves through touring, licensing their songs to TV and film, charting on radio, a #1 song on the iTunes Indie charts, buzz on popular music blogs, a social media presence of 30k fans, and a viral video (“Zombie Girl” has over 8 million views). They combine alternative rock with pop elements, and their sound blends that of classic acts like Queen and The Cars with modern favorites like Muse and Fall Out Boy. Now, with a new, pop/electro spin on their signature sound, they’re ready to share their new full-length album, Make Me Move.

Recording inside a 150-year old funeral home, the spirits have possessed them with the talent and tenacity to conquer. The quartet consists of E on lead vocals and guitar, Jim on vocals, synths, and piano, Lou on drums and percussion, and finally Hank on guitar and vocals. In a short time, they have released eleven studio projects with the most notable successes including the EPs Stalked, Home, and Meant to Rise. They have also manifested themselves on the charts with a #1 spot on the iTunes indie rock charts with their cover of The Turtles’ “Happy Together” (which also has half a million streams across Spotify and YouTube). Their tracks have also appeared on networks such as NBC, MTV, VH1, Fuse, Comedy Central, NBC Sports, and more, including the perfectly paired CBS show Stalker. In addition to successful headlining shows, they’ve shared the stage with such varied artists as Fuel, Fat Joe, Hinder, Eve 6, Sponge, SafetySuit, Rob Base, Halestorm, Puddle of Mudd, Trapt, Red, and more at shows all around the country.

“What’s It Gonna Take” is the first release from SPiN’s upcoming album Make Me Move (due out on August 31). Early in the writing process for the new album, the band was confronted with daily visits from the Philadelphia Police Department who continually issued fines and eventually shut them down following noise complaints from a neighbor. “What’s it Gonna Take?” Chudnofsky says, “it’ll take a lot more than the cops and one a**hole neighbor trying to run us out of our studio to stop us from making music.” To get around the legal issues and frequent police visits, the band were forced to optimize their creativity and rely on less familiar electronic drums and synth sounds with a different approach to songwriting and more pop-friendly production.

Directed by Jim Vacca and shot in their hometown of Philadelphia, the music video for “What’s It Gonna Take” opens up with a not-so-zombie girl putting in her headphones as the band comes to life. The video then transitions between various characters and beautiful personalities dancing to the beat. Filmed on the streets, various Philly residents connect universally to this feel-good tune in its purest form. As the video ends, a blooper reel runs showing the true positivity and tenacity that emulates from the group.

We’re honored to be working with SPiN once again! Here at HIP we hope you embrace the new clip for “What’s It Gonna Take” as much as we have and we’d love to see this video added into your cherished programming and online presentations in a timely fashion! Rest assured we’ll have plenty of SPiN merch available for on-air contests and giveaways so don’t hesitate to get in touch. For more information on SPiN please contact Andy Gesner and the HIP Video Promo team at (732)-613-1779 or email us at info@HIPVideoPromo.com. You can also check out www.instagram.com/SPiNrocks and www.facebook.com/SPiNrocks for recent updates on SPiN and visit www.SPiNrocks.com for more info.