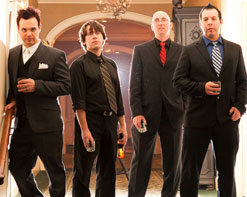 Carrying the flag of epic rock songwriters like Queen, The Cars, and Muse, Philadelphia staples SPiN have landed praise across all mediums including radio, charts, TV and film, and a healthy amount of glowing press. Their newest release, “Dig Your Own Grave,” comes from the new EP Meant To Rise. It’s a hard crashing rocker with a fuzzy wall of sound in the vein of QOTSA and The Black Keys that will remind listeners of the full power of rock and roll.

SPiN is the kind of band that fully understands that rock music is best appreciated in a live environment, hence their devotion to bringing their music to the masses, whether it be headlining their own gigs or providing support for Halestorm, Fuel, Hinder, Eve 6, Sponge, SafetySuit, Puddle of Mudd, Trapt, Red, Fat Joe and more in 600+ shows across 25 states. When not slugging it out on the road SPiN operates out of their Dead Handsome Studio, located inside a 150-year old funeral home in Philadelphia.

If the feedback from their previous EP, Stalked, is any indication of things, then Meant To Rise is going to be an even bigger accomplishment. The single “Happy Together” reached #1 on the iTunes indie rock charts, various tracks appeared on networks such as NBC, CBS, MTV, VH1, Fuse, Comedy Central, NBC Sports and more. Their music videos for “Playing Dead” and “Hearts in Flames” earned rotation in the U.S. on FUSE TV and in Canada on AUX TV. All of this has set the table for the brand new “Dig Your Own Grave” video, and it is one that pulls no punches in delivering a dose of satisfying rock goodness.

“Dig Your Own Grave” is the perfect dose of energy and sunshine for the chilly new year. Ceding their own camera time in favor of a fiery young starlet, SPiN provides the soundtrack to a wild romp through southern California. She begins her day on the beaches and streets of the bohemian bastion of Venice Beach. She makes her way to a nondescript apartment bloc and the apartment pool. These aren’t flashy locations, but it doesn’t matter because she brings the party with her! She’s a one woman wrecking crew, shovel in hand, ready to dig her own grave wherever she sees fit!

We’re very pumped to be working with SPiN and the crew at howsaboutNOW? Records to introduce you to this killer group. For those interested in all things SPiN, we encourage you to reach out to us here at HIP Video Promo, but also do yourselves a favor and check out their recent video for “What’s Going On?”, their unique take on the Marvin Gaye classic. Please contact Andy Gesner and the HIP Video Promo team at (732)-613-1779 or email us at info@HIPVideoPromo.com. You can also visit www.SPiNrocks.com for more info on SPiN.