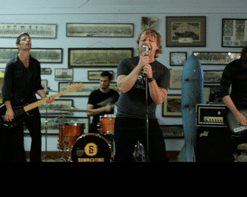 On its Voluminous Records debut album entitled Rewind, Minneapolis-based pop-punk band Summertime Dropouts has crafted an unforgettable collection of songs that transport the listener on a trip down memory lane. HIP Video Promo is pleased to once again work with this unstoppable band, and is proud to introduce their latest video “1999.”

From a musical perspective, the band draws from the inspiration of bands like All-American Rejects, Boys Like Girls, Blink 182 and Sum 41 to create a musical masterpiece teeming with pure pop-punk magic. Executive Producer Clint Gibbs, who has been involved with a string of commercially successful songs from big name artists, states, “Their skill and dedication to the music is on par with the ‘A’ crop of major label acts. After hearing the Summertime demos I knew they had a great record ahead of them.”

Summertime Dropouts’ previous video for “Full Time Cutie,” was an uptempo diddy that celebrated the beauty of being different and unique, even when the world doesn’t always deserve it! The song was lighthearted and fun, and with their new video for “1999” (which was hinted at as a note in the “Full Time Cutie” video) digs a little deeper and revisits strong memories of young love and the freedom of youth.

The compelling scenes of “1999” transform the present to the past in this pop-punk setting. Summertime Dropouts deliver a strong performance as each scene creates a backdrop for the past. Director Jonathan J. Arjes’ focal points focus on the band’s collective ideas of the past; the band members crowd around a projector and watch old home movies of themselves growing up in rural Minnesota, as the band’s performances bridges the gap to show the confident and talented group they have become.

Summertime Dropouts have proved that they will be sticking around for years to come and “1999” is a stellar example of their rapid maturation and songwriting prowess. For more information on this exciting band and their new clip for “1999,” please contact Andy Gesner and the HIP Video Promo staff at (732)-613-1779 or email us at info@HIPVideoPromo.com .