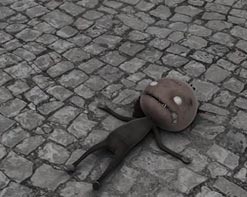 There is precious little known about the mysterious musical collective known as The Cautious Arc. Their sound is dark, danceable and difficult to describe. The group’s label–Anticodon Records–puts it like this: “Take the vibe of the New York underground, the spirit of European culture, and visuals akin to Warhol and press all this through a meat-grinder.” Intrigued? You should be. We at HIP Video Promo, however, believe the best way to understand The Cautious Arc is through the audio/visual medium known as the music video. And we are very pleased to present to you the Orwellian animated clip for the new single from their forthcoming self-titled ep, “I Always Got You, Brother.”

An instrumental tapestry of electronic beats, organic tones, weightlessness, and propulsion, “I Always Got You, Brother” is a multifaceted and moody track that transports you into a different space. It begins with the acoustic sound of a plucked guitar and a gentle flute setting a dark and mellow tone. Then, the beat drops and the song builds, with pulses, waves, and buzzing electronics. It hits its peak, opening up the beat with an oddly rhythmic sample of a child laughing set on top of descending piano keys. Throughout its length, The Cautious Arc deliver an thoroughly engaging experience.

That, however, is only half of the story. The video–based on the film “Children”–features striking animation by artist Takuya Okada and tells a chilling narrative about a dystopian future. It begins with a boy at a railroad crossing who witnesses a dog being hit by a train. He lives in a grey, concrete city with a skyline of billowing smokestacks. Here, all the children are indistinguishable from one another save for a four-digit number printed on their heads. Their mouths are zippered shut. A teacher who wears a smiley-face mask, teaches every student the same lessons and administers test which everyone aces without digression. In the school yard, they are led to believe they are playing games of competition; however, they are designed to deadlock and remain docile. The boy from the first scene is haunted by repeated visions of the dog’s death. He is shaken from is trance and begins to see the absurdity of his existence. Eventually, he breaks through his zippered mouth lets out a howl, igniting a revolution among all of the students. But as he runs past the railroad crossing with the newly-liberated mob, he is halted by the sight of the dog attempting to cross the tracks again. This time, he runs to save the animal, and–against all odds–manages to tackle the dog out of harms way, busting his own head open in the process. But the sensation leads him to burst out in maniacal laughter in the clip’s unsettling final shot. We are left with the question in bold lettering on the screen, “WHAT DOES IT ALL MEAN.”

For more information on The Cautious Arc and their compelling new video, please contact Andy Gesner and the HIP Video Promo Staff at (732) 613-1779 or email info@HIPVideoPromo.com .