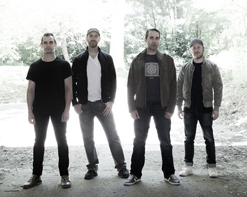 Here’s a lesson we’ve all learned from the Internet: cute animals make viewers pay attention. Since people can’t resist watching winsome puppies, filmmakers have acquired a fail-safe technique for gathering an audience. But what if that same magnetic power that directs millions of eyeballs to YouTube clips and Vines of animals at play could be used as a force for good?

Enter The Commuters, a thoughtful, observant, emotionally forthright New York City alternative rock band with a social conscience and altruistic impulses. Moved by the plight of a loved one stricken by lymphoma, Commuters frontman Zeeshan Zaidi was determined to raise both consciousness and money for research. His clip for “You’ll Stay Right Here,” a tender ballad from the band’s upcoming Before I Was Born EP, is a cancer story with a twist — its protagonists are a pair of adorable dogs. Zaidi wagered that their vulnerability would reinforce his message better than any human actors ever could, and he’s been proven right: the Leukemia and Lymphoma Society has chosen to partner with the Commuters’ campaign. All the money raised by the sale of the single will be donated to the fight against cancer.

This sort of gesture — and this kind of sentiment — is nothing new for the Commuters. They’re a band that has always led with their compassion, and an unshakable faith in the power of music to inspire and communicate meaningful ideas. The sharply-written songs and superb musicianship on Rescue, the group’s most recent album, won the Commuters a dedicated following; Before I Was Born is certain to build on that success. On the new EP, Zaidi and his bandmates address oppression, the importance of human connection, and the indestructibility of hope — and they do so in rock songs designed to reach as many people as possible. “You’ll Stay Right Here” is a perfect example of what makes the Commuters so affecting, and so irresistible, too: its narrator simultaneously communicates the anguish and fear of critical illness and the determination that’s needed to beat it.

That conviction carries over to the “You’ll Stay Right Here” clip — a video suffused with sweetness, but one that tackles a serious subject. Max and Bella are the sort of dogs that make strangers and passersby stop and pet them in the park: they’re that cute, and their affection for each other is apparent. They communicate through thought bubbles, but they hardly need to. It’s pretty clear they love hanging out and playing together, and when they do, it’s impossible not to watch. When Max is diagnosed with cancer and Bella is left to fret on her own, their separation is hard to bear. But Max is in good hands, he’s surrounded by love — and by the end of the clip, hope has triumphed over fear.

We’re all incredibly stoked to be working with The Commuters and to have the opportunity to share this heartwarming clip with the masses; it’s a distinct honor and privilege. Please get in touch with us and let us know if you’d like to get your hands on a copy of their new EP Before I Was Born, or if there is anything else we can do on our end to help secure the programming this band and video certainly deserves. Please contact Andy Gesner and the HIP Video Promo team at (732)-613-1779, or email us at info@HIPVideoPromo.com. You can also visit www.TheCommuters.com for more info on The Commuters.