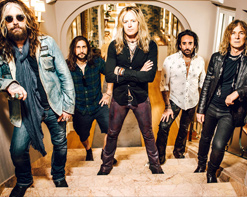 The lead up to the release of Make Some Noise, the new full length album by The Dead Daisies, has been a long, exciting road. The lead single for “Long Way To Go” was a blast of rock and roll intensity that showcased the band’s live show and tireless work ethic. Their commitment to the cause paid off in droves when Make Some Noise exploded on the charts, penetrating top 10 charts in on both Amazon Hard Rock and iTunes Rock, including a #1 spot on the USA Amazon Hard Rock chart!

Never a band to rest on their laurels, they’re already back out on the road as we speak, blazing across the US as part of the KISS Freedom To Rock Tour after spending the month of July in Europe. As always, they electrified fans across the pond and they’ve delivered proof with the new video for “Join Together.” This killer rendition of the classic song by The Who serves as the perfect embodiment of The Dead Daisies’ mission to celebrate classic rock while carrying it proudly on their shoulders into the future.

The new video for “Join Together” will reinforce what the initiated already know, that The Dead Daisies are possibly THE best live rock band on the planet today. The video comes from their performance at Woodstock Festival Poland, the biggest Open Air Festival in Poland this July. With an average attendance of over 625.000 people over the last four years, the festival is truly massive and the Daisies were welcomed by the giant crowd with open arms and left to thunderous applause.

Vocalist John Corabi states that “We wanted to do ‘Join Together’ ‘cause it’s obviously a classic Who song. I just love the power of the guitar and bass when it kicks in with the heavy riff on the second verse… Always have. The vocals are pretty easy to get the audience involved, and it’s been a crowd favorite when we play it live. We knew the minute we started jamming, it was going to sound great!!! It’s our tip of the hat to a LEGENDARY CLASSIC BAND… You may think of us as “Rockers” but, at the end of the day we’re just huge music FANS… Just like our audience!!!!”

Please get in touch with us here at HIP Video Promo immediately so we can get you out to see the band this summer when they hit your area with KISS! We’ve also included our Dead Daisies HIP Spotlight, featuring John Corabi and Marco Mendoza for some terrific behind the scenes content! Get in touch with Andy Gesner and the HIP Video Promo team at (732)-613-1779 or email us at info@HIPVideoPromo.com . You can also visit www.TheDeadDaisies.com for more info on The Dead Daisies.