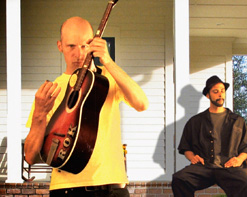 Greetings programmers! It’s Andy Gesner and the HIP Video Promo staff, shooting your way with a follow up clip from the 90’s star studded cast – The Feeling Hijackers! Some of you might already be familiar with TFH from their recent campaign with us for “Soul Rollin’.” However, if this is your first encounter with this hybrid kind, The Feelings Hijackers consists of The Presidents of the United States of America front man, Chris Ballew, and alternative hip hop artist and Sir Mix-A-Lot protégé, Outtasite. The genre defying duo return with another instantly hummable track titled “Goodbye Sunny.”

We’d like to remind you that Chris Ballew and his band, The Presidents of the United States of America, are a major staple of the 1990s alt rock community. In fact, it’s safe to say that most folks at or above their mid-20’s consider the songs “Lump,” “Peaches” and “Kitty” a household item. Ballew has permanently embedded himself in the eardrums of several generations, with his goofy, yet charming powerpop. Hell, PUSA even performed at Mt. Rushmore on Presidents Day! The Feelings Hijackers aims to continue the always optimistic and full-of-energy songwriting that made Ballew such a success. The jumpy, grooving jam “Goodbye Sunny” pays tribute to all of the things that have obsolete over the past several years. The track chronicles the disappearance of rotary phones, hair metal bands, MTV music video countdowns, and many other, at one point irreplaceable, pop culture morsels. “Goodbye Sunny” is a perfect nostalgic reminder of what was once oversaturated and now long gone. However, the track always remains bright, and will get you thinking of all the “hip” trends today that will be reflected about at parties in the next decade. The world is constantly changing, as so does the sound of The Feelings Hijackers, as they incorporate elements of funk, hip hop, and alt rock together into one smooth blend.

“Goodbye Sunny” is equally visually stimulating and clever. The video is full of zany and purposefully cheesy effects that are as funny as they are totally trippy. The duo is constantly found floating through wormholes of nostalgia, which eventually becomes part of them. The entire video is done via green screen and features some truly funk-tastic moments, such as one particular instant when Ballew removes his mouth from his face! The Feelings Hijackers know their strengths lay in making people snap out of their zombified 9-5 attitudes and join in the hootenanny, and they once again accomplish their goal.

“Goodbye Sunny” is the second single from The Feelings Hijackers 21 song album properly titled SupeRecord, out via Magmata Records. The album contains a combination of new and unreleased material, as well as previously released re-mastered favorites. The album is currently available on iTunes, Amazon, and other online outlets. Since the record’s release, the group has gained quite a loyal following through internet exposure and live appearances. Most recently, the duo rocked the underground music video world be reaching the #1 position on MTV Hive’s most viewed videos metrics, attaining several thousand views.

We hope you will enjoy this feel-good and high energy clip! We’ve got lots of The Feelings Hijackers stuff here at the office and would love to share it with you and your viewers, so let us know and we’ll get it to you right away. You can also visit www.TheFeelingsHijackers.com to find out more about The Feelings Hijackers.