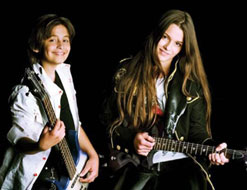 Hey there, programming friends! It’s Andy Gesner and the rest of the HIP Video Promo staff bringing to you first a young band that’s simply ready o rock. And trust us, when we say young, we mean it. Fronting The Fulcos is 13-yeaer-old Joei Fulco who proves in her band’s video “Home Alone” not to underestimate her age and eagerness to do great things.

If the band’s name, The Fulcos, sounds a little bit familiar to you reality TV show junkies, it should. This band is actually a family from Las Vegas that was featured in an episode of Wife Swap. It was here that the brood first showed off to the public what they were musically capable of. Their video for “Home Alone” simply reinforces that idea for those who are already fans of The Fulcos, but those who aren’t shouldn’t turn away just yet.

The video kicks off with the band’s mother berating frontwoman Joei and bassist Jesse to stay in and do their chores rather than attending a much talked-about party. As the duo fulfills their mother’s wishes of cleaning up, a group of teenagers are seen walking around the neighborhood, stopping in front of The Fulcos’ house and talking about inviting Joei out because she’s in a rock band. Her peers quickly dismiss the idea upon realizing that she won’t be let out and her being in a rock band is just not that big of a deal. This typical teenage problem eventually proves to not be so typical as Joei hits the sack and wakes up in a fantasy world where she’s performing in front of her peers. Joei, along with her brother, prove that them being in a rock band is a big deal, and she’s center stage with her guitar, belting out the problems of her youth.

While the video ends with Joei waking up from her dream, this is actually her reality. She fronts a four-piece band with the rest of her siblings and is the feisty leading lady. However young her and the rest of her band may be, you definitely do not want to underestimate their musical potential and their inevitable ability to draw in an obsessive, pre-pubescent crowd a la Disney stars like Miley Cyrus or even Justin Bieber.

We’re thrilled to be a part of this huge stepping stone for The Fulcos and are confident you’ll find their video for “Home Alone” lighthearted and entertaining. If you need more info, call Andy Gesner at 732-613-1779 or e-mail us at info@HIPVideoPromo.com. You can also visit www.TheFulcos.com to get more info on The Fulcos.